Shen Yun ‘Could Bring Life Back to China’, Says Psychologist 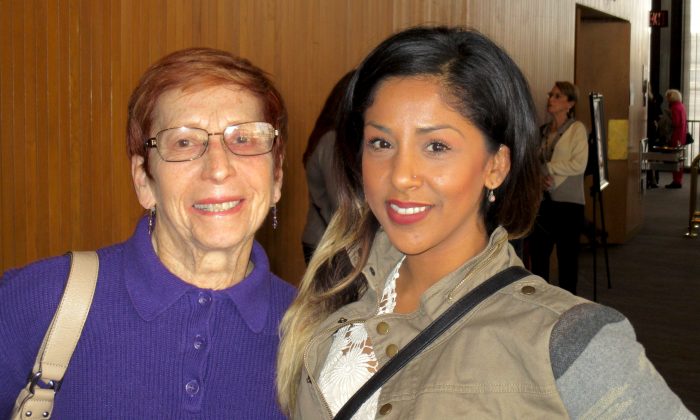 LONG BEACH, Calif.—Dr. Shirley Kashoff is a veteran psychologist with over 30 years’ experience. She brought her friend, Esther Rodriguez, to see Shen Yun Performing Arts at Terrace Theater for the afternoon showing March 20, which was sold out.

At nearly 80 years old, Dr. Kashoff maintains a private practice in Long Beach. She has an integrative approach to healing, with an emphasis on turning a negative into a positive. In Psychology Today, a website for professionals in her field, Dr. Kashoff states, “I am convinced that our most profound healing results from the recognition that our ‘wound’ has become our ‘medicine.'” And what she saw in Shen Yun she felt was healing in its own way.

Both she and Ms. Rodriguez were delighted to see the spirituality imbued in traditional Chinese culture that Shen Yun presented—or rather, restored.

Dr. Kashoff said, “I love this. I love the orient, but the spiritual aspect I had not seen before.”

“It actually brought joy to me to see them talk about heaven,” Ms. Rodriguez said.

Dr. Kashoff said of the performers, “It feels like it’s not just a dance or a performance—it’s a commitment. They are spiritually and emotionally involved.”

Indeed, Shen Yun’s website states, “Throughout history, almost every culture looked toward the divine for inspiration. Art was meant to uplift, bringing joy to both the people who created and experienced it. It is this principle that drives Shen Yun performers and their art.”

Shen Yun is a classical Chinese dance and music company that tours the world each year on its mission to revive China’s rich, ancient heritage.

Each performance includes approximately 20 vignettes which serve as a window into traditional Chinese culture—from the legend of the Yellow Emperor descending from heaven to rule the Middle Kingdom, through the exquisite beauty of the Tang and Qing dynasties, and all the way to modern times with stories of steadfast faith.

“I love it,” Ms. Rodriguez said. “They’re so elegant and beautiful, the way they move. You feel it when they’re dancing that they are telling a story.”

She also enjoyed the digital backdrops—which complement and are synchronized to each piece—and how the characters would leap from the backdrop onto the stage.

As a massage therapist, Ms. Rodriguez said she has studied Eastern and Western medicine, as well as meditation and spirituality. She seemed to connect with Shen Yun on a deep level.

“[This performance] speaks to me as well on that level,” she said. “I’m just in awe of this presentation. For me, it brings me a lot of peace. It feels like this is where I was supposed to be at this moment.”

Despite its resplendent beauty and critical, worldwide acclaim, Shen Yun cannot be seen in China today because of the Chinese Communist Party’s censorship and repression of traditional culture.

Shen Yun’s website states, “Entirely non-profit, and completely independent of the Chinese regime, Shen Yun enjoys the artistic freedom of New York, enabling it to now bring these ancient traditions to the stage.”

Dr. Kashoff was happy to learn this. “I am so impressed with the true story they are telling about the real situation” in China, she said. “That’s very important to me; otherwise, it’s just like a lovely fairy tale.”

“This could bring life back to China,” said Dr. Kashoff. “I hope this has profound influence.”

Ms. Rodriguez agreed. “I hope so. I really hope so. We need more leaders like that to show the way,” she said, referring to Shen Yun performers. “I agree with it. I really hope that this makes a movement and starts something.”