Shen Yun Connects IT Vice-President to a Spiritual Civilization 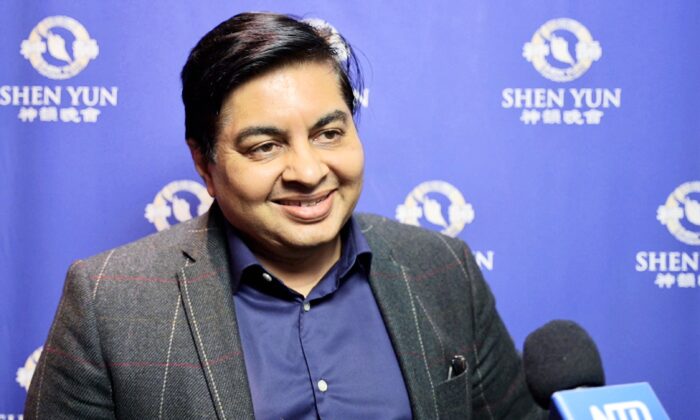 Deepak Chauhan at the Shen Yun Performing Arts performance at the Eventim Apollo, in London, on March 2, 2022. (NTD)

LONDON, U.K.—At a time when major religions are in decline across the world, audience members in London said that Shen Yun had helped them connect to a “supernatural power.”

New York-based Shen Yun is a classical Chinese dance and music company that aims to revive the beauty and spirituality of China’s traditional culture that has been all but destroyed after decades of communist rule in China.

Deepak Chauhan, an associate vice-president at a large-scale multinational IT firm, said Shen Yun is magnificent, calling it an eye-opener that “takes you back to a civilization that we don’t know about.”

Though the general message is regarding compassion and traditional values, he said, obviously “there’s a larger purpose.”

“I think there’s a larger being there—a supernatural power which I think was kind of central to this,” he said. Chauhan said the spiritual values of Shen Yun’s performers, who adhere to the principles of truthfulness, compassion, and forbearance in their lives, “definitely shine through” on stage.

“I think perfection within any art cannot be achieved without having that central self-belief, the meditative quality about it,” Chauhan said.

He said he wants to tell the performers they should “continue to do more of what they are doing.”

“It’s just such an important message. You don’t know how much you’re contributing to the world. This is very impactful,” he said.

Anastasia Marinopoulou, who leads an international management consultancy based in London, said she believes that the Chinese have “one of the most impressive ancient civilizations.”

She said Shen Yun performers “are really into it and they try to project kindness and delicateness, elegance—and elegance not only for moving the body but transmitting words, through the dance.”

Jonathan Rooks, a senior lecturer at London South Bank University, said he was “hugely impressed” and could “feel the energy from the stage.”

He said he had been slightly concerned about the fact that he is not used to Chinese music forms, but it turned out the way Shen Yun’s music is presented is “very accessible” and he “enjoyed the music very much.”