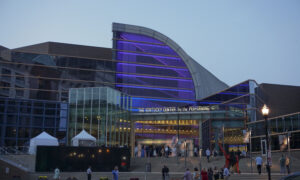 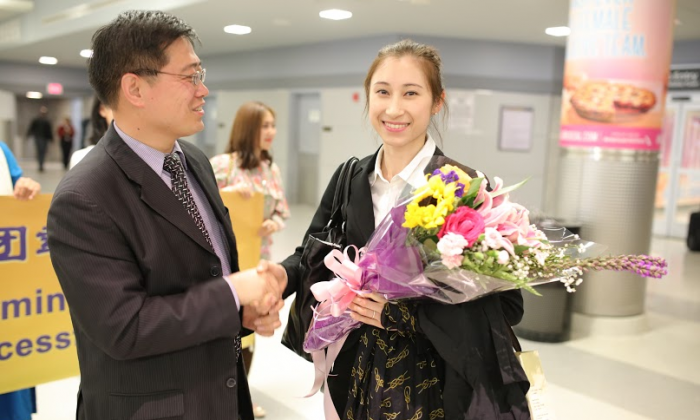 NEW YORK—On May 11, two dance companies of the New York-based Shen Yun Performing Arts arrived at John F. Kennedy Airport, ending their 2016 world tours. The dozens of young men and women in slim-cut black suits were met by a number of fans who delivered bouquets of flowers to the principals.

Shen Yun, now heading into its second decade, specializes in the art of classical Chinese dance. Since the latest tour season started in late 2015, its four companies put on hundreds of shows across theaters in scores of cities on multiple continents.

The Touring Company arrived around noon, having ended its tour in Argentina. The five performances there had sold out to enthusiastic audiences.

Australian-born Rachel Bastick, performs as a soprano, principal dancer, and this year, is director of the Touring Company.

“Their hearts are really touched, especially during the songs, they cry at the lyrics,” she said. “This brings us the most gratification, it tells us our efforts in putting on so many shows in different places were all worth it.”

Shen Yun performances feature about twenty theme-and-story-based dance pieces, as well as solo singers or instrumentalists. This year’s program included a mix of new and recurring content, including story-based pieces taking inspiration from the classic novel Journey to the West, as well as Chinese historical eras. Among these were depictions of a famous regal feud between a young Manchu emperor and a military usurper, or a supernormal struggle between Buddhist monks and Red Guards during the Cultural Revolution.

Shen Yun has been received enthusiastically for its attractive and authentic presentation of classical Chinese traditions and culture, but it is barred from performing in China due to its depictions of communist atrocities, in particular the brutal and politically sensitive persecution of the Falun Gong spiritual practice.

Shen Yun’s International Company, which arrived later in the day from South Korea, became the center of attention there recently, after their contract was cancelled under the enormous pressure of the Chinese Embassy.

Threatening letters from the Chinese Embassy in Seoul successfully forced a court into overturning its prior ruling in a civil case opened by Shen Yun to counteract earlier pressure from the consulate on the theater.

South Korean pop culture, notably Korean television dramas, are extremely popular in China. In the threats made by the consulate to the court, it was indicated that the distribution rights to Korean media in the Chinese market might be harmed if Shen Yun were allowed to perform.

About 8,000 tickets had already been sold at the time of cancellation.

Vina Lee, director of the International Company, condemned KBS for caving in to regime pressure.

“We need to take care of soundchecks, meals, rehearsals, exercise, and the shows,” said Jimmy Geier, a trumpet player who joined Shen Yun three years ago. “It’s really hard to find time to warm up and get ready.”

As the company travels, members of Shen Yun’s live orchestra must quickly and efficiently grasp and work with the peculiarities of each orchestra pit, explained conductor Keng-wei Kuo of the Touring Company.

As the dancers and musicians filed through JFK, their presence had already piqued interest for future audiences.

“I want to see the show next year,” said Mr. Nadim, an airport worker who happened to be near the baggage claim as the Touring Company passed by.