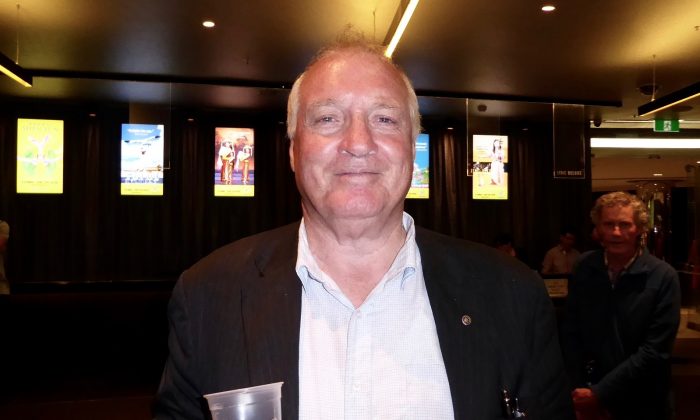 SYDNEY, Australia—Malcolm Brown, a former journalist with a major metropolitan daily, praised Shen Yun Performing Arts after seeing the performance at the Lyric Theatre in Sydney on Thursday night March 10.

“It’s beautiful, and it’s exquisitely beautiful. The storytelling is beautiful and it’s highly practised and very highly coordinated,” he said.

Mr. Brown retired in 2012 after a 40 year career with the Sydney Morning Herald where he was a senior writer and editor. He is also the author of 7 books.

He commented on the traditional Chinese content in the performance and referred to one vignette, called “Salvation and Renewal,” where the Creator calls upon the multitude of divine beings to descend to earth and fulfill their sacred vows, according to the company’s program.

“The emperor and all that represented ancient China, where everything was well-ordered and everything was in its place. There’s a suggestion that perhaps that might be the best way—to go back, instead of going forward,” he said.

In the vignette, titled “Trial by Fire,” Mr. Brown compared the attitudes between ancient times and the present day when dealing with the forces of evil.

“The only thing is in the ancient times, the devil came in and threatened the dancers, and it was driven out and shot dead by an arrow, and there is the modern day practitioners of Falun Gong and the guards came, the Red Guards. They weren’t vanquished, they were simply converted to practising Falun Gong and worshipping the Buddha. I can see a parallel there.”

Adherents of Falun Gong, a meditation and exercise practice, are persecuted in China today.

Mr. Brown was also impressed with the skill of Shen Yun dancers and the technical production of the performance.

“I haven’t been able to see a single flaw in any of the coordination and movement,” he said.

Classical Chinese dance is at the heart of Shen Yun. Recognised for its incredible flips and spins, and its gentle elegance, it is one of the most “rigorous and expressive art forms in the world,” according to the company’s website.

Using state-of-the-art graphics technology, Shen Yun’s digital-backdrop team also creates vividly animated settings, which extend the stage and transport the audience to a world where heaven and earth are one.

“I think it’s very clever, having the figures come down on the screen and then come up as real people, and the real people dive down. That is artistic and very, very clever,” Mr. Brown said.

He was upbeat about Shen Yun and its mission to preserve China’s divine culture.

“I think what they’re doing is preserving it for a time when it will come back. The Communist regime will not last forever in China, even now it is changing. When this Communist regime goes, as it inevitably will eventually, the culture will have been preserved and re-introduced into the Mainland.”

As an experienced journalist, were he to write about Shen Yun, what would he say?

“Well, I would write that it’s beautifully produced and it’s fascinating to watch,” he said.