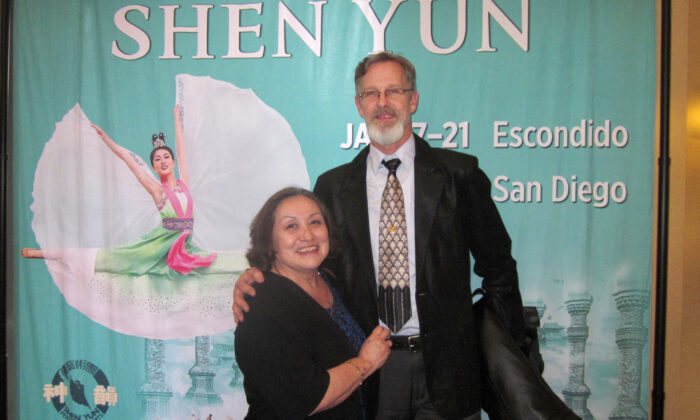 Rich and Barbara Young enjoyed Shen Yun at the California Center for the Arts in Escondido, California, on Jan. 18, 2020. (The Epoch Times)

ESCONDIDO, Calif.—Shen Yun Performing Arts is redefining how the world sees Chinese culture: Not as a society that makes cheap, throwaway commodities but a profoundly rich tradition whose core values resonate with people in the West.

After seeing the matinee in Escondido, California, on Jan. 18, 2020, several audience members said they were inspired and wanted to learn more about China of the past.

“I was in awe,” said Rich Young, a furniture salesman, of the performance. “It was beautiful. It was educational, informative, enlightening.”

“It was amazing to see the strength and the background of the Chinese people and it’s just been kept hidden for so long that we don’t really understand the people,” said Barbara Young, a retired banking operations manager.

She felt a spiritual element in the performance, “a spiritual awakening” that was “so deep [and] beautiful” and at times she was speaking through tears.

She contrasted what she saw in the performance with how China is commonly viewed today where “made in China” has a derogatory connotation. And we in the West, she said forget to “look at the [Chinese] people and all that they’ve been through and the[ir] strength.”

Shen Yun performances draw from the 5,000 years of Chinese civilization, using classical Chinese dance techniques that have been honed through the ages.

However, Shen Yun itself is not made in China and in fact has never been allowed to perform in the Mainland. The company was founded in New York in 2006 by a group of artists who were concerned about what was happening to Chinese society under the control of the Chinese Communist Party (CCP) and how the arts were being twisted around its agenda.

“China was once known as ‘The Land of the Divine,’ reflecting the belief that its glorious culture was brought down from above … But in 1949 the Chinese Communist Party came to power. It saw this spiritual heritage as an ideological threat and for decades has tried to destroy these traditions,” the program book explains.

The mission of Shen Yun is to revive past China’s traditions because the values and virtues they imparted to people can offer a way forward.

These values resonated with Californians.

“You can see that it’s a mindset and something that comes through in the performances. I can see that that’s a very spiritual culture,” said Colleen Ponce, a claims manager at Employers Insurance Group, who came with her family to see the performance.

Another audience member, David Belluci, director of engineering for a pharmaceutical company, said he felt there was great crossover between the traditional values of East and West.

“As I listened to the lyrics of the songs, themes like redemption and faith, themes like courage and bravery; I see many of these things in our own Western culture,” he said

In addition to classical Chinese dance, Shen Yun performances also include bel canto opera solos. When most people in the West think of Chinese opera, the distinct tones of Beijing opera come to mind. But surprisingly, in the past, both Chinese and European opera sounded similar because they used similar methods of singing, according to the Shen Yun program. This technique is what Shen Yun vocalists use.

In the culture created by the CCP, human life is considered expendable if a person is not serving the Party’s ends. In addition to the millions in history who prematurely lost their lives because of communism, today in China there are still many thousands persecuted for their spiritual beliefs.

However, in the Chinese version of gulag system, believers are vivisected and their organs sold for state profit.

Shen Yun performances shed light on these and other human rights abuses still perpetrated by the CCP. These pieces were some of the most compelling and thought-provoking for some audience members.

Razmig Mergiam, an interface design artist at a video game company, said that although these pieces were heavier, they were important. “I didn’t previously know much about that,” he said.

David Belluci said, “The struggles that are going on in China with people and their faith and the government … [were] really quite remarkably presented.”

Ron Woolsey, a history professor, and his son-in-law, Michael Ponce, who works for a lumber and building company, also mentioned that these pieces stood out to them.

Yet despite the heavy topic, Shen Yun is family-friendly. Colleen Ponce said the performance was a Christmas gift to her daughter and they were all enjoying themselves.

“For someone who doesn’t know much about Chinese history, it is very enlightening,” he said.

Barbara Young said she saw the values of “honor and sincerity and honesty” in the performance and was inspired to learn more.

“I’m actually really hungry now to dive in and get more information because this is just so deep,” she said.

She said Shen Yun’s mission is important and the performance changed how she saw China.

“They’re spreading the word about the culture that nobody has any idea of what it is  …  I think we need to look at China and Chinese people in a completely different way,” she said.