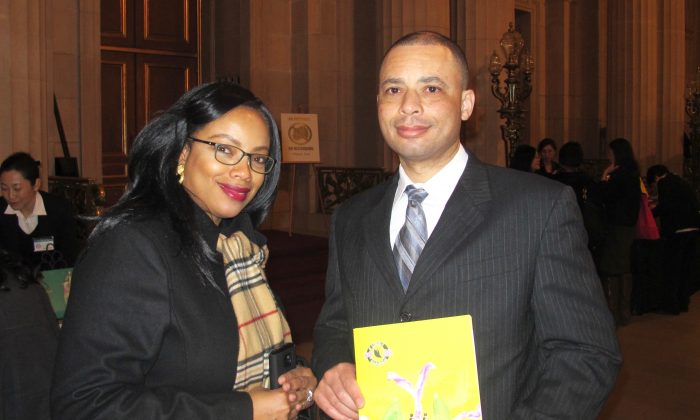 “This illustrates the beauty of Chinese culture,” he added. “It encapsulates the wondrous nature of 5,000 years of history.”

This is precisely what Shen Yun, a New York-based company specializing in classical Chinese dance, set out to do.

Mr. Gold and his companion, Desiree Samuel, attended the performance at the San Francisco War Memorial Opera House on Jan. 8. “I thought it was very beautiful, very colorful, and I loved the spiritual part of the show,” said Ms. Samuel, who works in accounting.

When the curtain rises at Shen Yun’s all-new 2016 performance, the first dance piece the audience sees is “Salvation and Renewal,” in which the Creator calls on divine beings to descend to the world and begin creating history.

“I felt like it was a manifestation of the divine nature of spirituality,” Mr. Gold said of the opening scene.

Ms. Samuel appreciated Shen Yun’s spiritual message, which made her contemplate the afterlife and the renewal of the cosmos.

According to Shen Yun’s website, Chinese civilization is unique in that it has recorded 5,000 years of history without interruption. This supplies a wealth of material for the many Shen Yun dance pieces that tell stories.

“It makes me want to learn more about Chinese culture,” said Ms. Samuel. In particular, she wanted to know more about how Chinese society, which once embraced spiritual beliefs, now restricts and oppresses them.

“I wasn’t aware that this show was not even allowed in China, which is very sad,” she said.

She also enjoyed hearing Shen Yun’s one-of-a-kind live orchestra that accompanies the dancers with both Eastern and Western instruments. “The music was another beautiful part of the show,” she said. “The orchestra was fantastic.”

“The fusion of Western music and Chinese music was very pleasing and harmonious,” Mr. Gold said.

Retired restaurant owner Dominique had never seen anything like Shen Yun before, though she has been to China and enjoys Chinese culture.

She appreciated the history in Shen Yun and the chance to learn about another culture. “It’s very touching,” she said when she saw the performance in San Francisco on Jan. 8.

Shen Yun’s website explains, “With state-of-the-art graphics technology, Shen Yun’s digital-backdrop team creates vividly animated settings, extending the stage and transporting the audience to a world where heaven and earth are one.”

“This show is amazing,” Dominique said. “It’s perfection. It’s beautiful. The music, the people, the stories—everything is different. It’s wonderful.”

She had always wanted to see Shen Yun, and this year she had a chance to attend with her daughter and grandchildren.

“What a way to start the year,” she said. “Keep doing it. It’s wonderful.”