Shen Yun Brings Relaxation and A Learning Opportunity to Edmonton 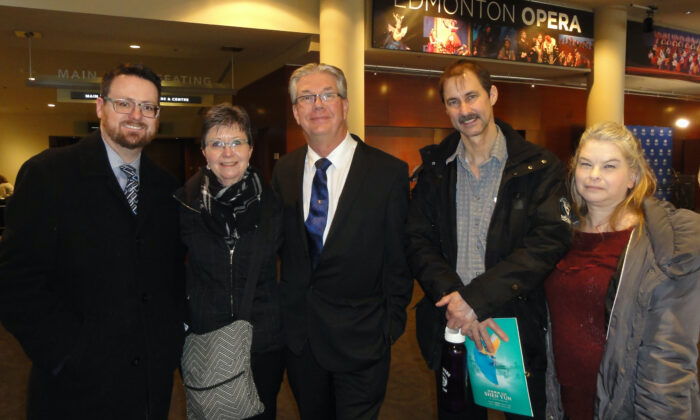 EDMONTON, Alberta—Business owner Brad Ray of Edmonton spent an evening with friends, colleagues, and family surrounded by beauty and music when he attended Shen Yun Performing Arts at the Northern Alberta Jubilee Auditorium.

“The quality was excellent. First-rate all the way through,” Ray said after seeing the New York-based classical Chinese dance company on March 7, 2020. Ray owns a company that services locomotives in Alberta, Canada.

“It was educational for me to learn that about Chinese culture,” he said.

Shen Yun’s mission is to revive traditional Chinese culture and share its profound legends, rich art forms, and spiritual way of life with the world.

“The dedication and skill and talent there,” said Edwards. “That’s a lifetime of work. We know people that are dancers and have a great respect for everything we saw there. That was a wonderful show.”

Edwards had words of gratitude for the artists themselves. “Thank you for bringing [Shen Yun] to Edmonton. We appreciate that.”

The name Shen Yun translates to “the beauty of divine beings dancing,” which Ray felt was fitting.

“The music was good,” he added. “I’ll confess when I walked in I was expecting more of that traditional Chinese twanging sound. I thought that the sound was Westernized enough to appeal to a Western audience. I enjoyed it.”

A soprano bel canto vocal performer delighted Edmontonians the afternoon Ray and Edwards attended the performance. “The singing was good,” Ray said. “I liked that they did the subtitles.” Min Jiang sang a piece titled “Words of Encouragement” that describes feelings of love during a difficult era when spiritual believers are persecuted for their faith. That era is now, in fact, since the Chinese Communist Party suppresses almost all people of faith in Shen Yun’s homeland of cultural origin, China. That’s why Shen Yun is based in New York and cannot perform in China today.

“It definitely helped that with the little introduction to things it sort of gave you a mindset to comprehend what the story was trying to portray,” Ray said about the emcees who speak briefly between Shen Yun’s storytelling dances and other vignettes.

Part of what the emcees impart to the audience are insights about traditional Chinese culture and the legends they’re about to watch. Ray and Edwards both appreciated Shen Yun’s efforts to bring back this culture from the brink of extinction.

“In Canada,” Edwards began, “we have a situation with our indigenous peoples where their culture is slipping away, so it’s very important to keep this. And for the Chinese culture, for 5,000 years of history, you know, absolutely that’s a must to keep that alive. So presenting shows like this … also the fact that [Shen Yun] change[s] the choreography every year—you put on a brand new production—that’s a huge amount of work. … So, thank you for that. It’s greatly important to keep the tradition and the history.”

Ray agreed: “I think it’s very important that people understand the history and the culture and not let that slip away.”

After spending two hours taking in all Shen Yun has to offer, the colleagues said they felt different after the show and that they’re certain they would encourage others to go see it.

“Relaxed,” Edwards said about how he felt after Shen Yun, “and we learned something from this. I would highly recommend the show to anybody, very much.”

“Relaxed and had an enjoyable time. A great way to spend an afternoon,” Ray added. Describing Shen Yun to others, he said, “is going to take me a few more words, but I’d tell them to go see it.”