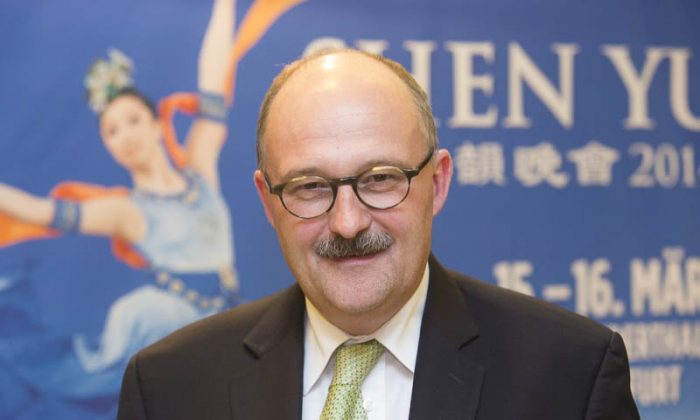 FRANKFURT—This is the third year that Dr. Michael Meister, Parliamentary Secretary of State to the German Federal Minister of Finance has attended the Saturday night Shen Yun Performing Arts performance at the Frankfurt Jahrhunderthalle. This year, like all prior years, he was accompanied by his mother, wife, and two sons.

“I enjoyed the Shen Yun show as much as I was when seeing it for the first time,” said Dr. Meister.

His sons love the Shen Yun performances. “My two sons would have loved nothing more than to go on stage and perform alongside the performers,” Dr. Meister said.

What mostly astonishes him every time he sees the show “is the deep connection to Chinese culture. It is so exciting to be able to experience something from a different cultural background. What is so unique is that the show seems to be connected to the professionalism the performers display on stage.”

Living a hectic life, Dr. Martin appreciates the effect the show has on him, “It brings some quietness and peace to my mind. It is so different from what one is exposed to in the entertainment world in Germany.”

He also appreciates that the performers are displaying “enthusiasm for their profession in their performances.”

For him, the Shen Yun is of a total different cultural circle and the “message is very profound. It is fascinating to be able to reflect on the profoundness during and after the show. One can let it sink in later.“

He added that the profound wisdom one feels emanating from the show is “independent of place and time.”

When asked to explain further, he said that he lacked the words to express it. “But, I have the impression that there are things inherent in the show that is timeless and not linked to any place.”

He will continue to talk about the show to those he associates with and will tell them that the performance is “colorful, dynamic, and of profound intellectual quality.”