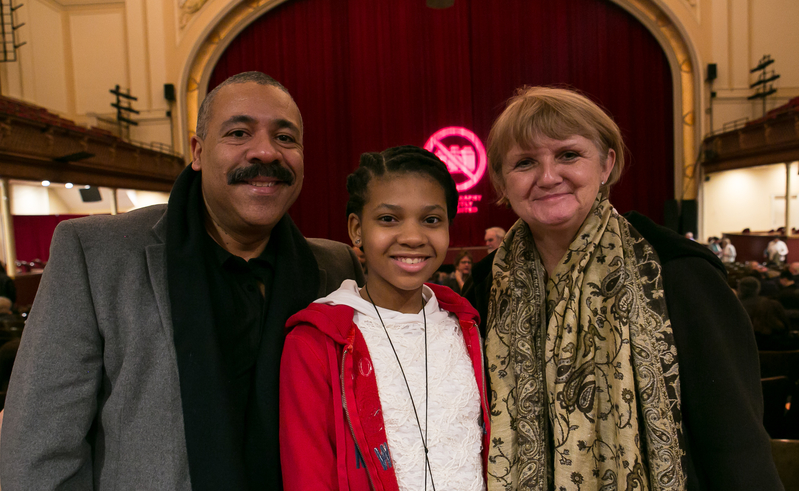 Louise and Gabriel Miller and their daughter at the Modell Performing Arts Center at the Lyric on Jan. 30, 2015. (Epoch Times)
Shen Yun

Taking in the performance, Dennis Redclift said he was so moved that he almost shed tears.

Based in New York, Shen Yun has a mission to revive China’s ancient culture, which has been all but destroyed under decades of communist rule in China.

A Shen Yun performance features classical Chinese dance, along with folk and ethnic dances, as well as musical performances. Award winning vocalists, accompanied by piano, sing Chinese lyrics using the bel canto style, and audiences get treated to the stirring melodies of the two-stringed erhu, also known as the Chinese violin.

Mr. Redclift said he particularly enjoyed the performance of the tenor.

“My heart sang! My heart is still singing!”

Listening to the deep meaning lyrics sung by the tenor, translated to English and projected on the backdrop, he said he could see “it is the truth.”

“It’s what we all hunger for, every human being. Me especially,” Mr. Redclift said.

According to the Shen Yun website, “Brimming with philosophical reflection about human life and containing deep layers of meaning, the texts go beyond the boundaries of nation, race, and culture, and have been fondly received and appreciated the world over.”

Watching the show left Mr. Redclift uplifted and calm; in his words, a feeling of “beyond happy.”

For example, commenting on the last dance piece, “The Divine Renaissance Begins,” which is set in modern China, Mr. Redclift said he was immersed in the show.

“It brings a peace over me, and goodness, and hope. I’m caught up in it.”

Also in attendance at the opening night were Louise Miller, director of marketing at Towson University, and her husband Gabriel Miller, administrator at the University of Maryland.

Ms. Miller heard about the performance on television, met a team selling tickets in one of Baltimore’s malls, and learned more about it at Towson University’s Asian Arts and Culture Center.

Ms. Miller said that Shen Yun was “amazing, beautiful, and the precision of the dancers is just impeccable.”

According to the Shen Yun website, “Chinese dance is at the heart of what Shen Yun does. Known for its incredible flips and spins, and its gentle elegance, it is one of the most rigorous and expressive art forms in the world.” Shen Yun performances also include folk and ethnic dances from different parts of China and its many ethnic groups.

Watching the performance, Mr. Miller said he got a few clues that Shen Yun is different from other Chinese performances, many of which are linked with the Chinese communist regime in China, unlike Shen Yun.

“When I first saw the dance from the Hmong (“In a Village of the Hmong”), I was surprised to see that included because I know that there are tensions in China between the Hmong community and the government, so that was my first idea that this was a different kind of production,” Mr. Miller said.

“So it’s interesting to see also the use of the divine aspect of the traditional culture, and so I think this is good for people to know—that it’s an ancient culture, not modern Mao.”

Shen Yun’s website explains, “Sophisticated dance techniques, an orchestra joining instruments from both the East and West, beautiful costumes, and a stunning back drop—this is Shen Yun at first glance. But digging deeper, one discovers a sea of traditional Chinese culture.”

While the Chinese Communist Party tries to remove the cultural essence of respect for the divine in China, “thereby extracting the heart and soul of traditional Chinese culture,” Shen Yun “seeks to revive these virtues the world over,” says Shen Yun’s website.

Mr. Miller said he also enjoyed learning about Falun Gong, or Falun Dafa, through the performance, a spiritual meditation practice persecuted in modern China. The persecution of this practice is portrayed through dance in two of the mini-dramas in the performance.

“That was very interesting also and important to understand,” Mr. Miller said.

The show is important for Western people to see because of “the depth of the Chinese culture,” he added.

Steve Ruffini, a social scientist, and John French, a writer, also were in the audience for the opening show.

“I enjoyed the dancing. I noticed there’s a lot of expression with the upper body in this type of dance and it was beautiful. The synchronized movements and the timing was just exceptional,” he said, noting the expressive nature of classical Chinese dance and its challenging flips and jumps.

Most impressive in Mr. Ruffini’s view was the state-of-the art animated backdrops.

Mr. Ruffini said, “The use of the imagery on the backdrop was amazing. To transition of people in and out of the dances was spectacular.”

Many of Shen Yun’s pictures on the digital backdrop depict celestial realms and divine beings, as China’s glorious culture is said to have been brought down from the heavens. The principles of benevolence, justice, propriety, and wisdom all come to life.

Mr. French, who has authored many fiction books, said the Chinese values are portrayed in the performance very well.

Reporting by Lisa Fan, Sally Sun, and Heide B. Malhotra