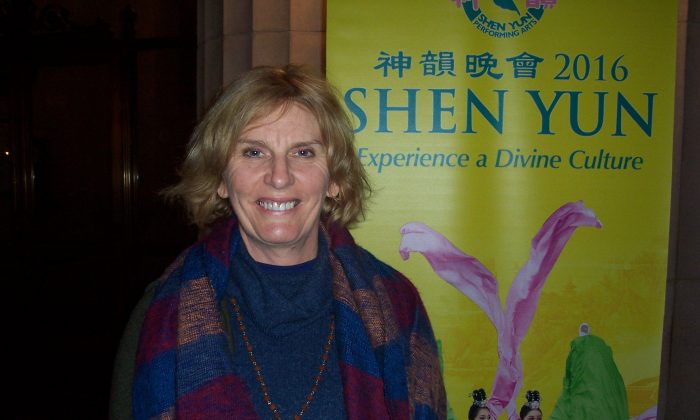 The New York-based company was founded by a group of artists who wished to bring authentic traditional Chinese culture back through music and dance, and share it with the world.

All 5,000 years of the divinely-inspired civilization was once nearly lost under communist rule, but today it is illuminated on stages across the world through Shen Yun.

Ms. Barrette was emotional as she described her experience. “You can beat people … you can even kill them, but you can’t kill the light. You can’t take that out of the world.”

She said it was like a spiritual message, “that the light is always supported, and the forces that oppose don’t really have as [much] power as we see.”

One of the aspects that most touched Ms. Barrette, a repeat audience member, was the fact that Shen Yun has brought back this traditional culture from the brink of extinction. The current communist regime has sought to destroy traditional values and arts, and suppress spiritual practices.

According to the company’s website, “In Shen Yun performances, themes like spiritual devotion, the benevolence of gods, good and evil retribution, and the search for the meaning of life have appeared in Falun Gong-related dance stories and lyrics. These programs touch the heart and enlighten the mind.”

Ms. Barrette explained that throughout history, many have tried to destroy peoples’ faiths, but in vain.

“Many many people, throughout time, have kept bringing the truth,” she elaborated. But even if the evil, or the opposing forces killed the people, they could not “kill the message.”

“It’s important we stand by our message, and be brave, and keep bringing the love, the light, and the dancing, and the song, and the divine,” Ms. Barrette said.

Such persecution is happening in China today, Ms. Barrette knows. “[It’s] terrible … It’s disgraceful actually. I don’t think we know the half of it here in America.”

Ms. Barrette praised the beauty of the performance and dancers.

She was amazed with Linda Wang’s erhu playing, its “human voice. Because I’m a singer, I really relate to the range of it. She’s amazing.”

Ms. Barrette said that her fingers were “flying and I can’t even keep track of what she did.”

In the costumes and movements and characters, she saw a grace and dignity. “I think it’s important to bring that back to modern society.”

She loved “the dignified grace and gentlemanly behavior, the warriors, the men protecting the women. We need old fashioned values back in the world.”

The finale was a powerful moment for Ms. Barrette.

“It’s a very powerful ending. It’s the truth. We come from the divine, and we’re going back home,” she said. What Shen Yun brought back was invaluable.

“I have a lot of hope for the future because I trust the divine,” she said.