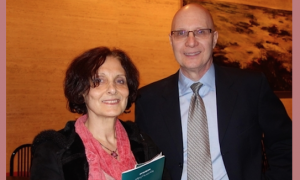 Company Owner: Shen Yun ‘Brings Me Closer to the Spirit of Humanity’

HOUSTON—Shen Yun Performing Arts was “a very enlightening and spiritual experience” for David Rolando when he saw the company at Jones Hall for the Performing Arts, Jan. 3.

Mr. Rolando is a consultant in the oil and gas industry and owns his own company, D&S Consultants, Inc. He said the spirituality he saw in Shen Yun was universal.

“I relate to it because it is part of humanity, … a cross-cultural experience of the spirit,” he said.

Shen Yun was founded in 2006 to revive China’s traditional culture through the performing arts. For thousands of years, the Chinese considered their culture to be divinely inspired and placed great value on principles like loyalty, courage, compassion, and propriety.

As part of bringing this culture to life on stage, the artists of Shen Yun consciously cultivate themselves following the ancient belief that only when an artist has good character can their art be truly great.

Mr. Rolando said that from the moment the curtain rose, he felt his heart expand and felt joy.

“The dancing and the artistic nature of the participants in it, it is just so good. It is enlightening,” he said.