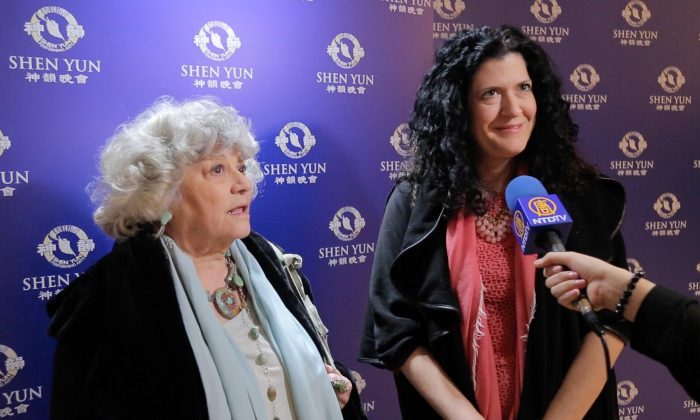 NEW YORK—Seeing Shen Yun Performing Arts was like getting a massage for Jane Archer. “Like a meditation, an immersive experience [with] all this amazing color and gorgeous dancing,” the artist/ illustrator said.

She’d heard about Shen Yun for a few years from her Italian born mother, who is a tremendously enthusiastic fan of the classical Chinese dance and music company.

Maria Pia Archer been wanting to see Shen Yun again for a couple of years, so the pair went to the Lincoln Center on March 6 for her birthday.

“I didn’t want anything for my birthday,” Maria Pia Archer said. “I want to go here.”

“I felt two years ago, I went to see for the first time, this show, and I feel this is the most incredible show on earth. Really. I’m not kidding,” she said.

“Absolutely stunning. The music, the… everything there is just breathtaking. I loved it the first time, … so I wanted Janey to see it,” Mrs. Archer said.

“And also it’s so relaxing,” she said.

Jane explained that she had a met a volunteer helping with advertising the performance. She had said she “was healed from diabetes after seeing the show. … She told me that because there were healing effects to the show.”

And she described the immersive effect of the colors and dancing, and plain loveliness.

As an artist Jane had certainly enjoyed the colors: “The palettes were incredible, and I loved the interplay with the background, with the people jumping out into the scene,” she said, about the interactive digital backgrounds that help makes the story-based dances come alive.

As a first-time viewer she really enjoyed the emcees introducing each piece, adding history and context.

“It was very moving, very beautiful,” she said of the whole.

“I think everybody should know it more,” her mother said. “Because they should really come and see it more,” she said, and was terribly happy that the production could now be seen in Italy. She’d called her nephew in Milan and told him to go.