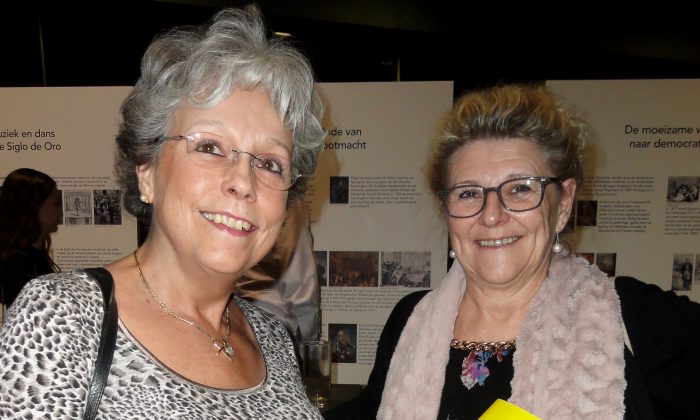 Luth Verbruggen and Diane Lierman at the Shen Yun performance at the Concertgebouw in Beruges, Belgium on March 22, 2016. (Epoch Times)

BRUGES, Belgium—Explosions—the latest in a string of terror attacks in European cities—shook Brussels on March 22, but that didn’t deter Belgians from experiencing 5,000 years of traditional Chinese culture onstage in the coastal city of Bruges.

We have to stay positive and today we are going to fill ourselves with beauty, with poetry … that’s what we need in this terrible world, actually.
— Luth Verbruggen

“We thought, will the show go on today, the city is so quiet and desolate,” said Luth Verbruggen, a medical worker who came to the Bruges performance with her coworker Diane Lierman. “I told Diane … we have to stay positive and today we are going to fill ourselves with beauty, with poetry … that’s what we need in this terrible world, actually.”

Shen Yun performances use the expressive qualities of classical Chinese dance to depict epic stories from ancient China all the way to the present, showcasing China’s imperial dynasties, the many different ethnicities in China, and virtues and principles from China’s divinely-inspired culture.

“It awakens something that comes from the heart,” said Ms. Lierman, who is fond of travel and is familiar with China. Ms. Verbruggen had heard about Shen Yun and recommended it to Ms. Lierman. “I thought, that’s really something for both of us, we have to go there.”

And it was a very new experience for the two of them, since a performance like Shen Yun cannot in fact be seen in modern China due to censorship by the communist authorities.

“Those beautiful dances,” Ms. Verbruggen said, “you cannot show this in China at the moment, because people don’t have the freedom to publicly practice their belief or opinion.”

Shen Yun’s depiction of ancient Chinese heritage and spiritual traditions as they existed before the many destructive campaigns waged in the name of revolution by the communists struck a chord with Ms. Verbruggen.

“It’s not only a fairytale, it’s also today’s reality. In China people still can’t stick up for their beliefs, that’s all a big secret. We shouldn’t think that [modern] China is only beautiful and gorgeous,” she said.

Aimé Cocquyt, who had seen Shen Yun in Bruges in previous years, said he admired the principles depicted in the Shen Yun performance and the message of hope it carried.

“It was really fantastic and lively,” Mr. Cocquyt said. “We are going home with a happy feeling.”

Beatrijs Vanhoutte said she enjoyed the dances, colors, and the music in the performance.