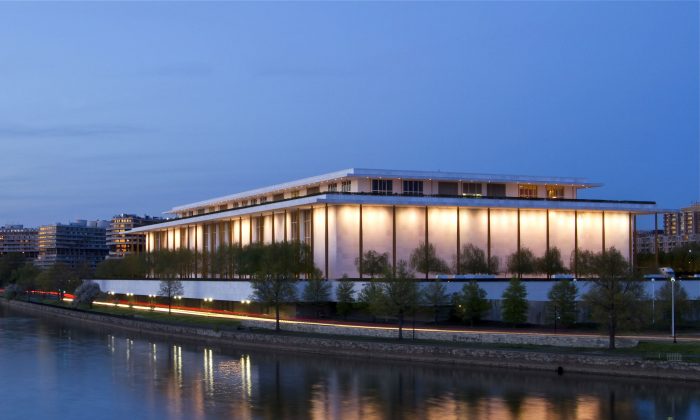 Heaven, earth, and humankind come together as one when Shen Yun Performing Arts takes the stage. Dragon kings, celestial fairies, and emperors of past eras are brought to life through art forms that have been passed down for thousands of years, and it all takes place on a modern stage with state-of-the-art technology.

With a name meaning “the beauty of divine beings dancing,” the music and dance company has been at the forefront of reviving a culture that was once nearly lost.

New York-based Shen Yun is now in its 10th year of touring the world, bringing the divinely inspired Chinese culture of 5,000 years to over 100 cities globally.

After two performances on Feb. 9 and 10 at the Hippodrome Theatre in Baltimore, Maryland, Shen Yun will return to Washington, D.C., for a seven-performance run this year. From Feb. 16–21, Shen Yun will perform at the internationally renowned Kennedy Center Opera House.

Every year, the performance astounds audience members, new and old alike, around the world. Theatergoers who have already seen Shen Yun during its 2016 tour this year have shared their insights. Within the 20-some vignettes of classical Chinese dance and musical solos, audience members from all walks of life have gleaned messages that spoke to them personally.

In Providence, R.I., earlier this month, Susan and Richard Schmidt felt Shen Yun was an inspiring message of peace.

“Very, very, very inspiring, and just exquisitely done,” said Mrs. Schmidt, a retired holistic chiropractor. “The message, the beauty, the exquisite air in which it was prepared, the beautiful way they brought the setting into the action … a message of peace.”

In Southern California, John Leinau saw a universality beyond words and a message of freedom.

“It’s people expressing at the highest level possible,” said Mr. Leinau, a fireman, carpenter, and surfboard-maker, at the California Center for the Arts on Jan. 27. “It’s an incredible privilege just to be here to watch people give back to the planet what they’ve worked so hard to master. So I consider it just an incredible privilege.”

“All over the planet, people want this freedom. And no one will know true, deep happiness until we’re all allowed to express freely, without harming and hurting one another,” he said. To freely express and not harm others was what he felt Shen Yun truly understood.

In Las Vegas, Spencer Haywood, former NBA star who was recently inducted into the Hall of Fame, saw a connection to a higher power.

“It was a message of peace, a message of hope, and also it was a message of joy. Most importantly, it was about joy and that there was a higher power involved—that you will reach that, as we all were dropped down from heaven. And if we do right on earth, we will go back into heaven. So it’s just excellent. I love it,” Mr. Haywood said on Jan. 22.

Patrick Kung was so captivated by the visuals that he was literally leaning forward in his seat, but he stressed that there is much more to Shen Yun beyond the beautiful visuals.

“There’s a message that I hope most people get out of it. And the message, I think, is [that] there is good and evil in the world. [Along] with evil, there’s good, and good will always prevail as long as it perseveres. I think the message was very strong tonight,” Mr. Kung said.

“It’s so admirable, and it makes you inspired to do things yourself,” he said. “Nothing is impossible, especially [with] the human spirit.”

There is something so moving about seeing 5,000 years of a divine culture revived that audience members often try to express something beyond appreciation for what Shen Yun is doing.

“I feel like it’s touched my life and changed my life in a way that I will never forget,” said Linda Eppinger, a music teacher and professional musician who saw Shen Yun in Perth, Australia, on Jan. 30.

“I think I am still opening it. I’ve only just taken the bow off, and I know I have got the gift because I feel it here. It was humbly and purposely given to me. I wanted to know who was behind the show that’s given me this gift. Ultimately, I think it is God,” Ms. Eppinger said.

Ancient Chinese, too, believed the culture and many aspects of it—like the arts, attire, and words—were gifts from the gods. The Chinese people believed in respect for the heavens, and that belief played a guiding role throughout society.

I feel like it’s touched my life and changed my life in a way that I will never forget.
— Linda Eppinger, music teacher

Artists, for instance, valued virtue and cultivating self-refinement in order to create art that could uplift and inspire, according to Shen Yun. Today, in seeking to revive the traditional art forms like classical Chinese dance and bel canto, Shen Yun’s artists do the same. They meditate and practice truthfulness, compassion, and tolerance. The artists seek to uplift and inspire, and treat these beliefs as the heart of the forms they present onstage.

Judging by audience members’ reactions, the effect has been tremendous. Many interviewees speak of the performers’ joy and passion resonating with them, whether they are seated in the very first row or up in the balcony. The artists seem to have brought the heart of Chinese culture to life in a way that is understood universally.

The revival of culture is one that also resonates deeply with the Chinese. As Shen Yun explains, it is a revival because traditional Chinese culture has been all but lost. When communism came to power in China, systematic campaigns to uproot traditional beliefs, like the Cultural Revolution, ensured that the people of China had little or no connection to their rich history and past.

The generation of Chinese scholars born after the 1970s tends to look away from Chinese traditions, while searching for inspiration from Western sources. For example, Mr. Lijun Hu, who holds a doctorate in Western philosophy and is now a student of theology, said he was just like that. Yet, in seeing Shen Yun, his perspective of Chinese culture immediately changed.

“I cried at the start of the performance because I saw the pinnacle of what human art can reach,” Mr. Hu said. “The quintessence of the Chinese culture is manifested in such exquisite beauty and such divine virtues.”

“Today, I finally realize that the traditional Chinese culture, which emphasizes inner beauty and reverence for the divine, and the qualities of a sage and a king in one person, is the zenith of human civilization. Shen Yun is incomparable in its display of this culture. I wept, as I am so grateful for the opportunity to see Shen Yun,” he said.

Mr. Hu has visited the art museums in Washington, D.C., Chicago, and New York; however, he considers Shen Yun a “living museum of the beauty of life and the nobility of the soul.”