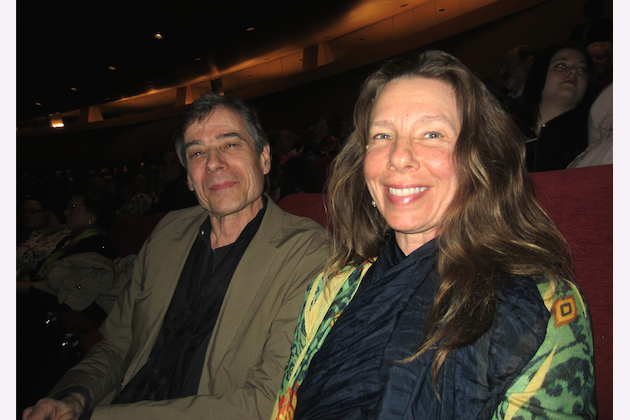 The former philosophy instructor at Jefferson Community College attended the classical music and dance performance at the Kentucky Center’s Whitney Hall on March 23 with his friend Kari Nolan.

“I’m just soaking up all of the colors and movement. It’s very dynamic,” said Ms. Nolan, a teacher.

Mr. Hellner explained that he is fond of Chinese philosophy and mentioned the discussion of “how heaven and earth come together to form a harmony and a unity, even within the earthly plane.” And he felt that Shen Yun did a good job of showing that.

“This artistic endeavor demonstrates this [unity] in so lovely and such a beautiful and splendid way,” he said.

In fact, as the website explains, traditional Chinese culture is considered a gift from the gods, and depicting the intersection between man and god is at the heart of Shen Yun’s mission.

Of all of the 20 or so dances in an evening of New York-based Shen Yun, Mr. Hellner felt most touched by a dance about the persecution of those seeking this traditional connection in China today.

“I was very touched by the episode about meditators, about meditation. This did surprise me. I did not know that it was so difficult for people of a meditative and contemplative disposition. … So my heart goes out to those people,” he said.

About the quality of the performance, he said, “It’s so fluid, and of course I love the colors and the interaction of the graphic work with the dancing. Outstanding! And particularly how they jump off the stage and go flying into the air, so beautiful, so beautiful.”

In addition to classical Chinese dance, one element that Shen Yun is known for is it’s digitally animated backdrops that seem to bring deities from heaven down to earth, as live performers take over their roles.

Ms. Nolan felt particularly impressed by the classically trained singers. “Really without thoughts or without being able to put words to it, it was very resonant and moving emotionally, I thought. Even if there had not been words on the screen [behind] her. I just was thinking what a wonderful gift from heaven to be able to use your voice that way.”