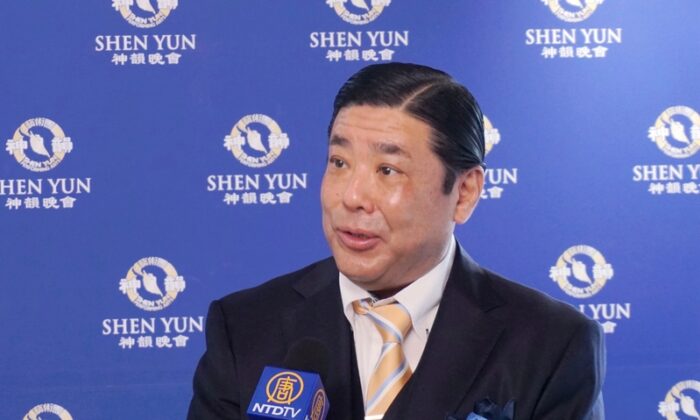 Hayashi Kitibei, who is widely recognized as Japan’s living national treasure, enjoyed the Shen Yun performance at Rohm Theatre, in Kyoto, on the afternoon of Feb. 1, 2020. (Lu Yong/The Epoch Times)

KYOTO, Japan—After performing three times to a full house at Rohm Theatre in Kyoto on Jan. 3, 2020, U.S.-based  Shen Yun Performing Arts New York Company put out three additional performances at the same theater again on Feb. 1-2, before it wrapped up its 2020 Japan tour.

Attracted by Shen Yun’s reputation, Hayashi Kitibei, a prominent drummer of Japanese Noh Gaku, took advantage of this opportunity to attend one of the additional performances in Kyoto on Feb. 1.

Noh is a classical Japanese performance form that has been performed since its inception over 650 years ago. It is famous for being extremely refined and elegant and is one of the most ancient living forms of theater in the world.

As one of the most well-known performers of the oldest type of classical Japanese performance art, Hayashi said he was delighted to attend the Shen Yun performance rich in authentic Chinese culture.

“I am very happy to appreciate the Shen Yun show, with an open mind that art is limitless,” Hayashi said.

He also explained that belief is the conviction in humans’ minds, and it’s the essence of art, and that belief can make a performance have purer energy.

“Shen Yun is very unique, I felt a kind of [divine energy] from time to time during the performance,” he added.

“Shen Yun has a compact and refined program rich in content,” he continued. “It makes me feel very happy,” he said with feeling.