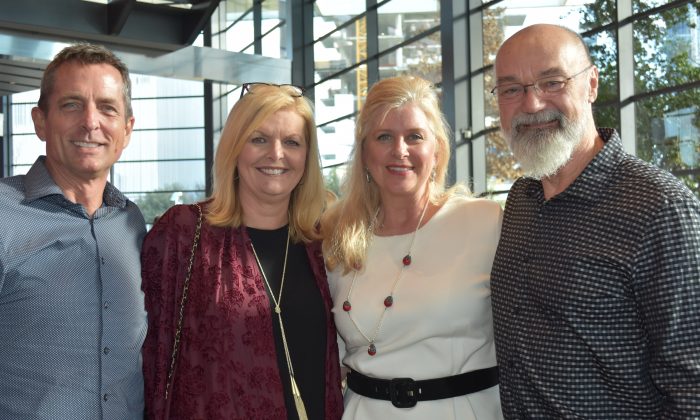 DALLAS—David and Carol Higgins, and Joe and Sherry Waters came to see Shen Yun Performing Arts together at the Dallas AT&T Performing Arts Center–Winspear Opera House. The Waters and Mr. Higgins are managers, and Mrs. Higgins owns a business.

Carol Higgins said, “It’s beautiful visually. Very stimulating,” and added that the four of them appreciated the emcees who take the stage before each performance to give context of each story to the audience.

That context helped Mrs. Higgins look at Chinese culture from inception until today from a historical perspective.

“Just the historical perspective of what the dances are intending to mean, and then just interestingly, the fact that there’s still persecution happening in China and people there don’t have the opportunity to see this type of artform,” she said.

Shen Yun was formed in 2006 in New York. It’s mission is to revive China’s 5,000 years of traditional culture, which has been repressed in China since the communist party seized power.

Sherry Waters felt that her impression was similar to her friends:

“Just beautiful colors and visually appealing, and interesting,” she said. “And they [Shen Yun performers] are just so talented. They’re all so talented and obviously very well rehearsed.”

Mrs. Waters was interested when she learned that Shen Yun performers practice Falun Dafa, a spiritual practice based on the principles of Truthfulness, Compassion, and Tolerance.

She was also surprised to learn that the Chinese Communist Party persecutes Falun Dafa practitioners in China, and primarily because of that, Shen Yun cannot travel there.

“That was a surprise, that’s what we were talking about actually,” said Mrs. Waters.

Shen Yun’s backdrop is patented and extraordinary: dancers seem to step in and out of the magical worlds presented on the screen.

What the quartet felt watching the performance varied from person to person.

Mr. Waters felt relaxed and that it was an enjoyable situation. Mrs. Higgens agreed with him.

“Sounds simple but it is happy,” she said. “It just makes me happy to sit there and listen to the live orchestra and see the pretty colors, and just let it sort of wash over me. It’s just happy.”

‘This is what we want to teach them’

Michael and Tanya Sze brought their young daughters to Shen Yun and were happy that the girls could learn about their heritage.

Michael Sze is a physician and Tanya Sze is a lawyer with her own private practice.

“The dancing, the choreography was amazing,” said Tanya Sze. “The perfect coordination of everyone, and the beautiful flow; the garments, the costumes, and, some humor in there.  And, about God, and creation and spirituality, freedom of expression, freedom of religion.”

Mrs. Sze said that she celebrates that there is freedom of expression and freedom of religion in the United States.

“So we celebrate that,” she said. “And we’re very sad for what’s happening in China. My husband is from China. He came here after the communists … . He came here in 1980. It’s personal to our family too.”

Mrs. Sze commented on Shen Yun’s mission to revive the traditional 5,000-year traditional Chinese culture and share it with the world.

“I think it’s wonderful,” she said. “My children—we’re trying to teach them Chinese culture. So they learned something today. This is what we want to teach them, so they’re a part of their heritage.”

“I think it’s very nice,” he said. “I think it just made me realize how interconnected art is across the whole world.”

Mr. Sze commented on dance as an expressive form.

“It kind of cuts across culture, and it’s a universal language,” he said.

Shen Yun Performing Arts freely expresses the spiritual nature of traditional Chinese culture, and they freely use their artform to depict China through the ages. Mr. Sze said that expressing spirituality is important for people.

“I think it’s a basic need,” he said. “And then humanity always has looked to religion for answers, and also peace of mind, and being to accept certain destinies in their lives. I think there’s just like necessity that is sad that not everybody can access.”

With reporting by Amy Hu, Diane Gao, and Carrie Gilkison.