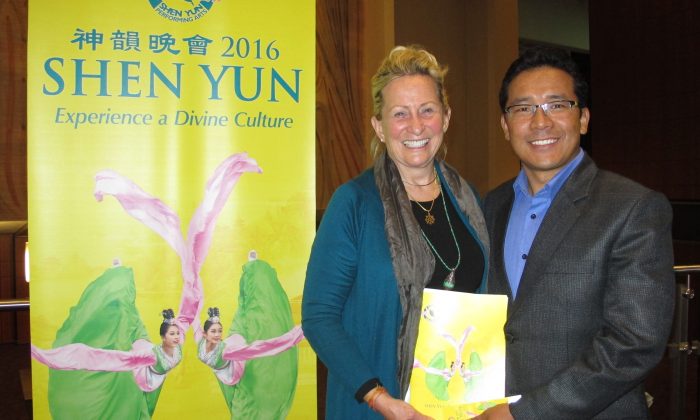 FRESNO, Calif.—Goa and Jule Lama knew that China had a rich history—5,000 years of dynasties, stories, and legends. But to see it brought to life in vivid color and movement was something no one at the William Saroyan Theatre on Jan. 17 could have imagined.

“Seeing, visualizing, taking this energy of the incredible; the power the artists can perform in telling this story, there is … hope,” Mr. Lama said. In the stories he saw that though there are difficult times in life, there are also happy and joyful moments, and ultimately hope. Through music and dance, New York-based Shen Yun has revived traditional Chinese history from the brink of extinction.

“We are happy we are here, we got the opportunity to see the beautiful performance,” Mr. Lama said.

The idea of hope, both in Shen Yun’s stories and in their own lives, was a big takeaway for the Lamas.

In Shen Yun, the couple saw that spirituality was integral to the traditional Chinese culture. It is a vital part of any culture, Ms. Lama said.

The heart of traditional Chinese culture specifically is a set of values and principles that are rooted in Buddhism, Taoism, and Confucianism, according to Shen Yun. They are principles like benevolence, justice, good triumphing over evil, and respect for the heavens.

These concepts, Mrs. Lama said, “are integral to a healthy society, so it’s quite profound.”

But how does a dance performance present concepts this profound through movement on stage?

One aspect was the digital backdrop, Mr. Lama said. Images of Buddha, heavenly scenes, and celestial palaces were on full view to accompany the dances. It was subtle at times, but fully effective, he said.

Another way the concepts were presented was through stories. Mr. Lama noted several different time periods during which some of the stories were set, and how these principles played out in different times and situations—thousands of years ago, in the 16th century, in the 1960s, and so on.

“The message I take—the spiritual is a very important part of the human civilization,” Mr. Lama said. In the performance, and their own observations of the world, the couple interpreted Shen Yun as a story of civilization through the ages. A story about these principles that have bolstered a civilization and been suppressed in modern times. Mrs. Lama noted it was specifically seen in today’s China, where the communist regime has tried to destroy traditional beliefs and religions.

As civilizations have developed, there was been a trend toward the material, but it is important to remember that in even our everyday lives, that “spiritual practice is included is essential,” Mr. Lama said.

Lastly, classical Chinese dance is famously expressive. Facial expressions are combined with movement for an amplified form of expression, according to Shen Yun’s website. Plus, dancers take on the bearing of characters they portray, and do so with an authenticity that has amazed audiences worldwide.

The effect was equally profound for the couple.

“It made me think about things. There’s a lot going on in the world … and we can only hope that people will be gracious and kind to each other,” Mrs. Lama said. “We need to embody those concepts.”