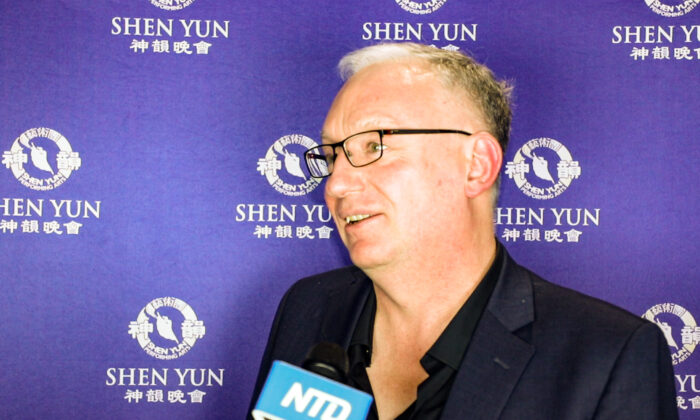 Mr. Limbrick was excited at the chance to enjoy a night out at Melbourne’s Palais Theatre on April 22, saying it was the first time he’d been to the theatre in years because of the pandemic lockdowns.

“I think it’s really important that performances like Shen Yun are able to continue in Australia and throughout the world,” he said.

This aspect of the production struck Mr. Limbrick, who said it was a “magnificent performance.”

“I’d recommend it to anyone. The amazing dancing and special effects, and integration with the history and modern projections that they did, and the special effects was just really amazing.”

Mr. Limbrick praised the Shen Yun dancers, saying they were “some of the most skilled dancers I’ve ever seen,” and he encouraged people to come along and see them.

He also as praised the Shen Yun Orchestra, which is the first in the world to blend classical Western and traditional Chinese instruments.

“The orchestra, the music was absolutely amazing, and we got to hear some traditional instruments as well,” he said, referring to the solo two-stringed Chinese erhu performance. “It was a really great experience.”

The Tran family, who love going to the theatre and have seen many performances, also attended Melbourne’s opening night of Shen Yun.

“I think this is one of the best that we’ve seen,” said Tina Tran, a financial analyst.

“It should be on your bucket list … must, must do,” she added.

Ms. Tran said that in addition to feeling thankful to the company for showcasing the richness of authentic Chinese culture, she was mesmerised by the production’s choreography, its colourful costumes, and all of its design elements.

She said it was also nice to see Chinese culture showcased on stage in Shen Yun.

“Everything about it was so beautiful,” she said. “I’ve always loved ballet. But this just brings it up to that next level.”

“I think it brings people closer to China … this highlights the arts, you know.”

The art form at the heart of Shen Yun is classical Chinese dance, which has been developed over thousands of years to become one of the most comprehensive dance systems in the world.

Shen Yun has a mission to revive China’s 5,000 years of traditional culture, which was all but destroyed by the modern communist regime when it took power and launched political revolutions to do away with the “old” and bring in the “new.”

This year, Shen Yun’s world tour is bringing to the stage “China before communism.”

Ms. Tran remarked on how phenomenal China’s history was, prior to becoming known as a developing nation under communism. But she lamented that its rich history and culture was not “appreciated as much around the world.”

Being of Vietnamese heritage, Ms. Tran said she understands the oppression faced by many Chinese people under the tyranny of a communist regime.

“Everything is still quite restricted [in China]. As we know, for example, social media or internet, everything is tracked, whereas in Australia, or non-communist countries, [you have] freedom.”

The Tran family went to see New York-based Shen Yun as a surprise from Mr. Tran.

“My husband surprised us today with the show,” Ms. Tran said.