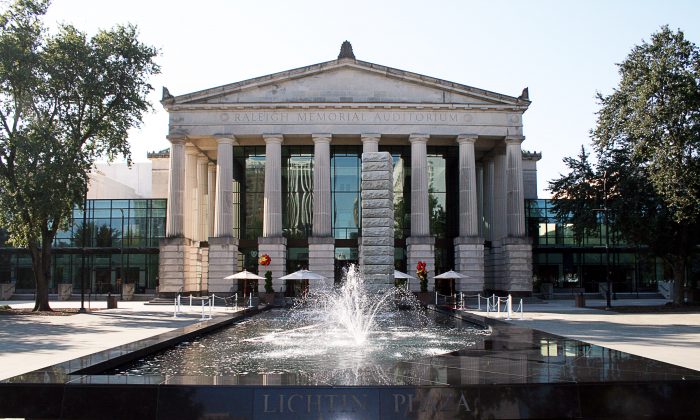 The Memorial Auditorium at the Duke Energy Center for the Performing Arts in Raleigh, N.C. January 2016.(Maggie Xie/Epoch Times)

RALEIGH, N.C.—Young Daniel Stompel plays saxophone and had learned piano before as well, but he doesn’t like anything in the arts, “nothing!” said his aunt Tanya Smirnov, a piano teacher. Yet when she brought him to see Shen Yun Performing Arts, he was excited, curious, and spoke enthusiastically of the entire performance.

“I am really interested in all of these ancient history kind of people, so I understand every single bit of it,” Daniel said of the stories told through classical Chinese dance in Shen Yun.

It had been a family outing to see New York-based Shen Yun at the Duke Energy Center for the Performing Arts on Jan. 24. Daniel said his parents asked him about his favorite part, “but I honestly said I didn’t have a favorite part. All of it impressed me.

“It was amazing, the music was beautiful, the dancing was like magical! Doing flips and not getting dizzy, that is crazy!” he said. “I would really want to go [see] Shen Yun again.”

Even Daniel was impressed with his own enthusiasm. He thought he had no interest in dance, but loved what he saw.

What Shen Yun performs is classical Chinese dance, which is an art form that has been refined continuously through China’s 5,000 years. The form is famously expressive, combining facial expressions with body movements and the performers’ bearing to bring characters from any era or setting to life—perfect for storytelling. It is also rigorous, as Daniel noticed, and performers are required to master difficult aerial and tumbling techniques like flips, spins and leaps.

“I would say this is the most beautiful thing you will probably ever see in your life,” Daniel said, adding that he probably had more to say but this was all just off the top of his head.

The performance appeals across age groups, according to Victoria Patrey, a chef. It was Ms. Patrey’s third time seeing Shen Yun, which puts on an all-new performance every year, and it was “just top-notch.”

“It is absolutely beautiful and breathtaking. Don’t miss it,” Ms. Patrey said.

Ms. Patrey was so eager to recommend the performance because of the gratefulness and perspective that comes with seeing Shen Yun.

“It makes all your problems seem very small,” she said. With a blizzard on the way and worried family members, words get heated quickly. But then “all of a sudden, you look at all the inspirations and all the divine beings on stage and your troubles just melt away.”

She felt like none of those problems are really important “as long as you have your health and your life and be happy, you are doing fine.”

The performance seemed to say “Peace to everybody and just enjoy your life the way it is.”

“Be thankful for who you are and all God has granted you. That is the message I got and I will go home with it. Please come and see the show,” she said.