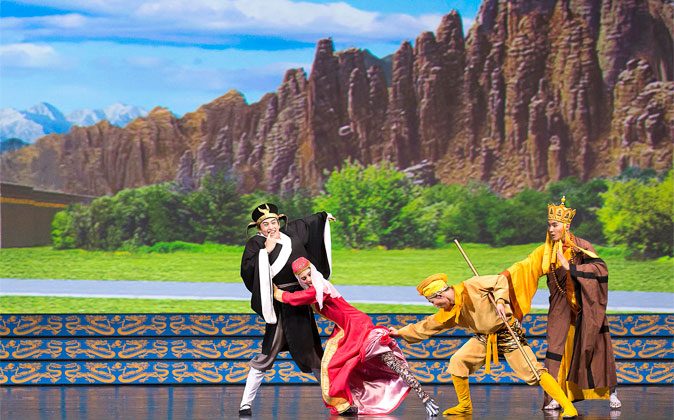 (L–R) Pigsy, a demon disguised as a beautiful woman, the Monkey King, and monk Xuan Zang, as Shen Yun envisions the characters from the literary classic, “Journey to the West.” (Courtesy Shen Yun Performing Arts)

It is said that the Monkey King was born from a mystical stone egg at the summit of Flower-Fruit Mountain. The courageous primate first established himself as the ruler of the apes, and then learned the Way from a Taoist master, who taught him to develop a wide range of extraordinary powers.

But the Monkey King was mischievous and stirred up chaos wherever his travels took him. He rampaged through the Dragon Palace of the Eastern Sea, terrorized the king of hell in the underworld, and even brought disorder to the heavenly court of the Jade Emperor. No god or enlightened being was able to match his strength.

Finally, deities sought the help of the Buddha, who ensnared the troublemaker in his mighty palm. Thus began the Monkey King’s imprisonment, and his path to redemption.

This is the opening tale told in “Journey to the West,” perhaps the most easily recognized of China’s four major classic novels. This tale is also retold by internationally acclaimed Shen Yun Performing Arts, which uses classical Chinese dance to bring major characters and stories from this 16th-century epic to life on stages around the globe.

In the novel the monk Xuan Zang leads a group of pilgrims seeking to retrieve holy scriptures from the land known today as India, home of the Buddha.

In fact, there really was such a monk. Xuan Zang made the dangerous trek in 627 A.D. It took him 17 years to complete the journey, which he did mostly on foot, across the Himalayas to what was known in China as the “Western Paradise”—and back again. The journey was a tremendous success: He returned with over 1,300 sacred scrolls and spent the rest of his life translating them—forever changing the face of Buddhism in China.

In the novel, Xuan Zang is protected by powerful guardians appointed by the Goddess of Mercy. As in real life, he has been sent on his mission to India under the authority of the Tang Dynasty Emperor Taizong.

The journey west from China across the mountains is perilous. Along the way are all sorts of demons who aim to capture and eat the monk, believing that his holy flesh will grant them eternal life.

The monk, who has sought spiritual perfection through nine lifetimes, is deemed fit for the monumental task at hand, but is helpless at protecting himself. His bodyguards possess great abilities, but have fallen from heaven. In accompanying the monk they have been offered a chance to mend their ways.

The Monkey King, by far the most powerful of the bodyguards, is now given the name Sun Wukong, meaning “enlightened to emptiness.” The monk’s other protectors are Pigsy, a fallen deity who appears as a jovial-yet-lustful man-pig, and the Sand Monk, a former immortal exiled to earth as a river monster.

The episodes Shen Yun takes from the pages of “Journey to the West” are like many of the dances in a typical Shen Yun program, which the company’s website states are drawn from the “pages of history, literature, and universal themes.”

These dances tell stories that helped form the Chinese outlook on life through millennia. They involve great acts of heroism, or the illustration of a moral principle, or examples of how the gods helped shape a culture traditionally regarded as semi-divine.

In addition to classical Chinese dance, Shen Yun also offers folk and ethnic dances, bel canto style singing, an orchestra that melds a Western orchestra with Chinese instruments, digital backdrops that can transport the audience through space and time, and gorgeous costumes.

A nonprofit organization based on a campus in the countryside north of New York City, Shen Yun produces an entirely new program of dances, songs, and musical scores each year. Beginning with one company in 2006, Shen Yun now has four companies that tour the world for five months, visiting over 100 cities in the Americas, Europe, East Asia, and Oceania.

In offering these programs, Shen Yun seeks to revive China’s ancient culture, which was almost destroyed under the rule of the Chinese Communist Party.

Chinese classical culture remains in high regard around the world, and particularly in East Asia, where Shen Yun has performed at theaters in Taiwan, Japan, Korea, and other nations.

“Everyone in Japan knows the novel ‘Journey to the West,'” said classical Japanese dancer Hanayagi Jugetsuen, who saw Shen Yun this year. “Many Japanese dances also incorporate some of the stories from the novel.”

“The way Shen Yun presented the story was full of wit and humor, something we feel quite at home with,” she added.

Others have praised Shen Yun for its child-friendly performances that demonstrate basic moral principles, such as those embodied in its portrayals of “Journey to the West.”

Below the surface of the novel’s action are complex themes of hardship, teamwork, temptation, discipline, and cultivation—the attempt to improve oneself morally and spiritually.

The group of pilgrims faces 81 trials in its journey west, and many of these trials are reflections of their own imperfections.

According to an introduction on Shen Yun’s website to “Journey to the West,” the character of the Monkey King can be seen as “representing the ‘monkey mind,’ a mind of unruly thoughts that need to be reined in.”

Shen Yun points out that despite the disciples’ shortcomings, each is offered forgiveness and redemption. “And the ordeals they face—from conquering fear to resisting temptation—represent the trials and tribulations one must overcome along a spiritual path.”

“Indeed, in this novel so rich in symbolism, the tribulations the travelers face are metaphors for the trials one must pass on a spiritual journey,” states the Shen Yun website.

“Yet, in the end, the pious pilgrims triumph, they return to China with the sacred scriptures, and return to their rightful places in the heavens,” the Shen Yun site says.

“In bringing these traditions forward, the story of the Monkey King inspires us to reflect on where we came from, and on our own journey home.”