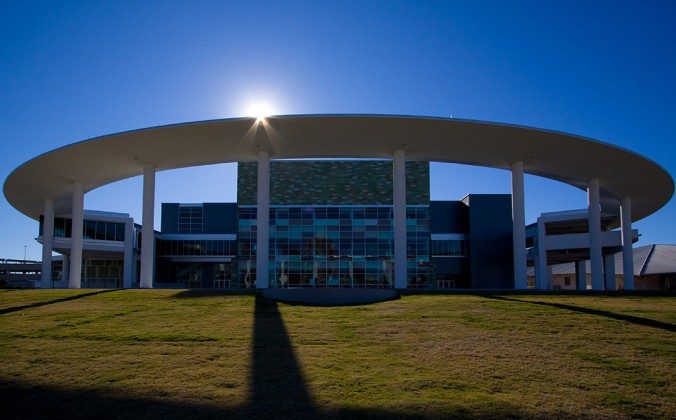 The Long Center For The Performing Arts in Austin, Texas. (Randy Heisch/Epoch Times)

AUSTIN, Texas—Artist Jane Frederick was so exhilarated by Shen Yun Performing Arts’ presentation in classical Chinese dance and music she hopes her memory retains all she has seen.

As an artist, Ms. Frederick appreciated the beautiful and agile movements of the dancers.

“It’s graceful, and I can’t believe how agile the performers are, and how the tumbling and everything are really dramatic,” she said.

The colors are beautiful and they do a lot of complementary colors, so it makes it really pop.
— Artist Jane Frederick
As an artist, she found a new inspiration from the show for her future creations and admired the color combinations used in the performances.

“The colors are beautiful and they do a lot of complementary colors, so it makes it really pop,” she said.

According to Shen Yun’s website: “Shen Yun’s digital-backdrop team creates vividly animated settings, extending the stage and transporting the audience to a world where heaven and earth are one.”

“As a matter of fact, I was thinking how could I try and represent that in the painting, and just haven’t quite figured out how because you know, you can’t take picture of it, so I am still trying to figure out how I am going to make it work.”

Ms. Frederick appreciated the grace and beauty of the show, and could related to the traditional Chinese values evident throughout the performance.

She also noted the spiritually imbued into the performance from the opening curtain to its closing.

“I love to say that compassion and tolerance should be in the same value in every society, unfortunately they are not but they should be,” she added.

Ms. Frederick had found a new culture, brimming with tolerance and compassion, and good values from the performance. In fact, she was also inspired to tell her friends to catch the next performance.

“It is exposing [us] to a whole new culture,” she said.