Shen Yun Awakens the Divinity within Audience in Gunpo 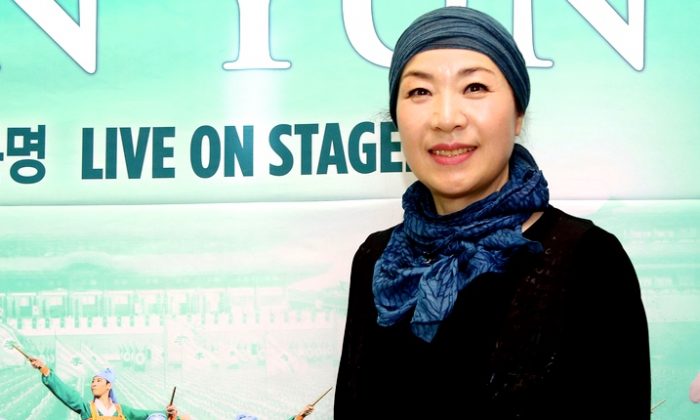 GUNPO, South Korea—”Shen Yun gives people a hope, a hope that a person can return to heaven if he believes in Gods and cultivates himself,” said Cho Yeongbin, director of musical Ye Dang Gugak Center, after seeing the performance at Gunpo Culture & Arts Center on April 26.

Shen Yun website explains the connection between arts and heaven, “Throughout history almost every culture looked toward the divine for inspiration.” For Shen Yun performers and musicians, such spiritual connection is the “motivation for striving to excel, is the heart behind each movement of the dancer and each note of the musician.”

“People should keep their oath to Gods,” said Ms. Cho, after hearing the song “Divine Pledges Fulfilled.” She explained the song was a call to awaken the long-forgotten oath people have made to Gods.

Shen Yun performance includes soprano soloists that sing bel canto style with Chinese lyrics. And according to the Shen Yun website, the Chinese lyrics philosophize on the origins and meanings of life.

“The song repeatedly touches a chord with my heart as if it is a spring that keeps on nourishing my soul. It is simply divine.” said Ms. Cho.

Classical Chinese dance places much emphasis on grace, precision and control. Some of the most difficult techniques—jumping, leaping, turning and flipping—give the classical Chinese dance special expressivity that transcends cultural and linguistic barriers, according to the company’s website.

“I want to jump into the animated backdrop and dance.”

‘This is beyond my imagination’

“I simply couldn’t hold back tears as I was watching the performance.

“Ancient Chinese culture and Korean culture share the same origin,” said Ms. Na. “As a Korean myself, I am deeply touched by the programs, enamored by Shen Yun.”

China was once known as “Shen Zhou” or “The Land of the Divine.” Ancient Chinese believed their glorious culture was a gift from the heavens. However, much of the 5,000 years of traditional Chinese culture has been lost under communist rule in China, and Shen Yun’s mission is to bring back what is bestowed to Chinese people by heavens.

Mr. Choi echoed his wife’s view, saying “Unimaginable! This is beyond my imagination. I must know when the show is coming back.”

“The programs and choreography are beyond my wildest imagination. It is a culture that exists now, and will continue to exist in the future.”

‘I could sense the divinity with the songs’

“It was so wonderful I thought I was in a dream while watching the performance,” said Lee Ganggyun, a conductor who has years of experience working in KBS Symphony Orchestra, Korean National Ballet, Asan Symphony Orchestra and is now the conductor for Soliall Philharmonic Orchestra.

“I come to see Shen Yun every year. And every year, I always feel that the orchestra is even more splendid and magnificent than that of last year,” said Mr. Lee.

Shen Yun Orchestra is unique in that the Western philharmonic orchestra plays the foundation, while the traditional Chinese instruments lead the melodies, stated the orchestra’s website.

Agreeing with the fact that any traditional culture originates from heaven, a touched Mr. Lee added “I could sense the divinity with the songs.”

“If only more people could come to see Shen Yun.”