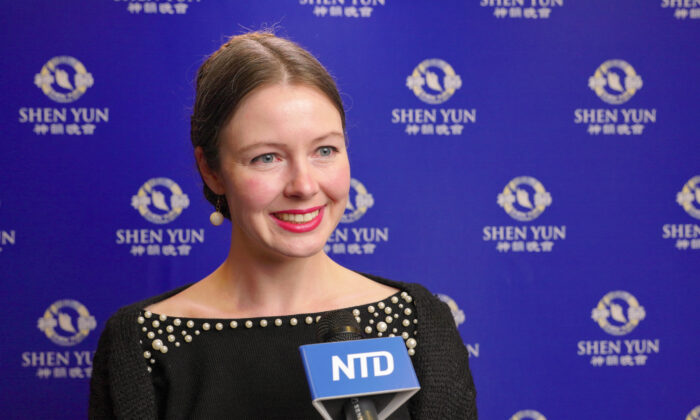 “It was very colorful and you could see that the artists really mastered the technique. It looked like it was really easy, but when you look at it closely, you realize that it’s really hard. They were jumping so high,” she said after attending the March 11 performance.

The artists of New York-based Shen Yun are trained in classical Chinese dance. The art form has thousands of years of history and is actually the root of many other art forms that we know today, such as gymnastics and acrobatics.

Ms. Wiesner, who came with her husband, appreciated the ethnic dances presented by Shen Yun too, “I think traditional dances are very important for today’s society. I also think it’s very good that different provinces in China are represented, the dances that come from those provinces. I think that’s important because Chinese society is also very diverse,” she said.

Given the recent restrictions due to the pandemic, Ms.Wiesner was grateful to experience Shen Yun, saying, “I think it brings back good humor and hope, and a little more feeling of life and also the value of life, which one has lost a little bit in the last somewhat dreadful time—one feels much more alive.”

‘I found it so ingenious’

Angela Montenegro, a specialist in neurology and psychiatry focusing on acupuncture and traditional Chinese medicine, said that Shen Yun touched her heart.

“Ingenious, ingenious! That was what touched the heart and in this way … it is what I have always wished for,” Ms. Montenegro said after attending the March 12 performance.

Both Ms. Montenegro and her husband felt a connection to Shen Yun‘s presentation of traditional Chinese culture.

“This appealed to me so much, also my husband who feels the same as I do, and it was brilliant. It was so awesome and I plan to come back next year,” she said.

“It is the summation of dance and music, one feels the inside of the performers, that they live what they dance. What they live by and the music are vibrations that touch the soul, and it was exactly the wavelength that touched me—I found it so ingenious.”

The classical Chinese dance company’s mission is to revive traditional Chinese culture by presenting “China before communism” and its divinely inspired culture.

“I think to feel this—the connection with the above, to the divine, to the Dao—is so important, and I find it great to feel this here in this performance. That is what is being lived here,” Ms. Montenegro said.

Many of the Shen Yun artists practice Falun Dafa, a peaceful spiritual discipline that teaches the three universal principles of truthfulness, compassion, and tolerance. The practice is under attack in present-day China by the communist regime which promotes materialism.

“I thought it was great that this was expressed, what Falun Dafa actually is, the connection to the old values that I think have also been lost in our Western society,” Ms. Montenegro said.

“I only hope that as many people as possible feel the same way as I do, and that these vibrations that Falun Dafa conveys, the compassion and all these principles, humanity above all, are felt, and that the people who see this performance simply leave with a different feeling,” she added.

“It is an excellent complete work of art that conveys values and charmingly guides people,” said Jürgen Block, a visual artist who attended Shen Yun‘s performance in Mühlheim on March 12.

“I think the artistic performance is excellent, the movements, the gestures of the artists, this harmony with the music … We have the technique of combining all the visual impressions [of the stage design] with the art, with the aesthetics, and with the dance. So I think it’s an incredibly great combination—a complete work of art.”

Each Shen Yun dance piece displays the essence of traditional Chinese culture’s core values, through stories from ancient times to the present day.

“There are many messages in it: what are basic human values, about aesthetics, about education, about culture, helping one another. And the combination of all that with each other and among each other, that comes across very well,” Mr. Jürgen said.

With Shen Yun‘s mission to revive traditional Chinese culture and share it with the world, Mr. Jürgen applauded the company’s endeavors.

“That [Shen Yun] is a great story. One should take this depicted thought and internalize it, within oneself, spread it further, and align one’s own life according to that,” he said.

Reporting by NTD and the German Epoch Staff.