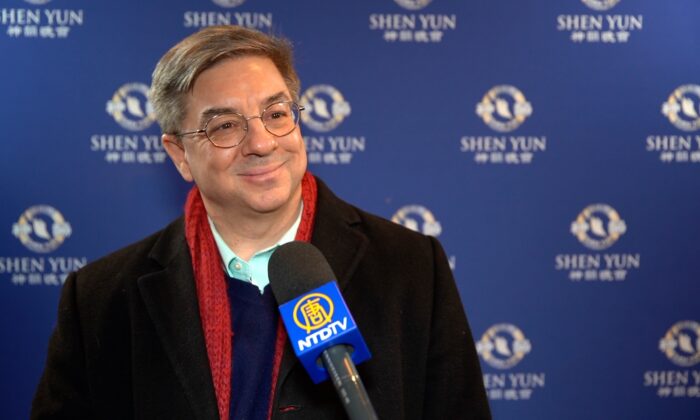 ROSEMONT, Ill.—“Being able to tell a story in dance is wonderful and that’s something that Shen Yun does marvelously,” attorney John Vishneski said after seeing Shen Yun Performing Arts on Feb. 15, 2020, at the Rosemont Theatre.

New York-based Shen Yun is a dance and music company whose mission is to restore traditional Chinese culture through classical Chinese dance, an orchestra blending East and West, and animated backdrops in a production that travels the globe every year.

“I very much enjoyed the performance,” Vishneski said. “Having a live orchestra makes it … as a musician I listened to the orchestra and I noticed that a lot of the original compositions as the program notes have a lot of focus not only on the Western instruments, in general, combining with the Chinese instruments.”

He also appreciated the clarinets especially, as John S. Vishneski is the principal clarinetist for the Chicago Bar Association Symphony Orchestra. He is also an attorney for international law firm Reed Smith.

Some of his favorite dances throughout the performance were the comedic ones. “I love the novice monks where you have some really wonderful comedic timing going on, I’m used to ballet but seeing it with the Chinese dance is a whole different thing, it’s wonderful,” he said of some the comedic interplay.

The attorney felt touched by several of the dances. In one, the leap of faith in the story made an impression on Vishneski.

“Well you took a person who was not a spiritual person and was introduced to a spiritual life, and all the other monks that were up there weren’t willing to take the leap of faith but he was and it shows that a personal journey of somebody can be very important and not everybody is willing to do it,” Vishneski pointed out.

There was more than dance. Vishneski noted a solo soprano performance in the bel canto style.

“She was very moving,” he said. “It’s very simple. The piano and the soprano and she got across the message very well. It was beautiful.”

Like classical Chinese dance, bel canto is another longstanding traditional art form the company seeks to revive. Shen Yun vocalists are noted for being able to sing in this challenging style while retaining perfect diction of the original Chinese lyrics.

“It was interesting from an American perspective,” Vishneski said. “Reading those words you have to put yourself in the Chinese perspective, I could see … the pain and the suffering that people still feel from that separation of their previous culture. [It] came across very strongly, and my daughter asked me if I cried and there was a point where I did shed a tear.”

The performance was a journey of emotions, and the finale was suitably grand.

It was an experience he wouldn’t hesitate to recommend.

“It’s a window into a culture that you don’t often get to see and the artistry is top-notch and it’s a great experience,” he said.