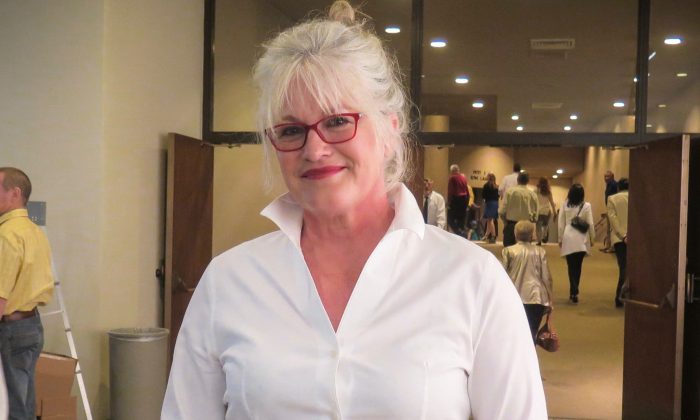 WICHITA, Kan.—A happy couple enjoys a carefree time in a park when friends arrive who start performing Falun Gong’s mind-body, meditative exercises. The feeling is serene. The mood changes abruptly as police arrive, beat those exercising, and even haul off the husband, who tries to intervene. In jail he is tortured until he is half dead, and despite his release from detention, his mind is shattered. This is part of Shen Yun’s dance, “The Steadfast Heart,” and it documents a story from China’s recent past.

This dance, as well as a couple of others in the 20 pieces Shen Yun Performing Arts presents, depicts the repression of spirituality by the Chinese Communist Party and it touched some audience members deeply.

“I thought [the dancers] really did a very good job of portraying that emotion that trauma or whatever you would call that, that pain,” said Lori Craine, who saw the performance at the Century II Performing Arts & Convention Center, on April 4.  She was accompanied by her husband, a veterinarian, and their three adult children who attend Kansas State University.

Shen Yun tells stories from ancient legends, through several dynasties and regions, and on to modern times by highlighting one of the most expressive dance forms in the world, classical Chinese dance.

According to program notes, the dance is so expressive that characters’ feelings and personalities can be vividly portrayed.

For Dee Greene, a psychotherapist specializing in Adult Child & Family Counseling, also in the audience,  said the theme “touched me a lot—… the suffering that has been going on for generations. And that people have a lot of suppression in that country. … It stands out very much in the drama, and in the dancing, and in the music.”

Ever since taking power in 1949, the communists have whittled away at traditional culture and beliefs. During the Cultural Revolution in late ’60s and into the ’70s, monasteries, sacred texts, and temples were targeted for destruction, as depicted in one of the dances.

Pain was a theme in another way for Ms. Greene. She was thinking about the lyrics to a song. Present in every Shen Yun piece are spiritual elements, but perhaps they are clearest in the songs performed by award-winning vocalists. The translations to the Chinese lyrics are projected on the backdrops so that the audience can reflect on them.

Baritone Qu Yue’s “What Are You Here For?” asks the philosophical question of life’s true purpose.

“Countless lifetimes you have reincarnated,” is one of the songs last thoughts, and Ms. Greene was struck by the belief in living many lives.

“The human drama, I now realize, is a tale of pain,” he sings, mentioning the illusions that status and wealth give us.

“Life is here for pain,” Ms. Greene said it meant. “And on this earth we live for pain, which is an interesting message to me, it’s not something that I am used to hearing,” she said.

The alternative to a life of pain is recognizing the illusions and returning to Heaven.

Whatever deep moments Ms. Greene experienced, her overall impression was that the performance was marvelous: “The colors are joyful and delightful. The talent is unbelievable. It’s just an amazing walk through history, that … kind of surpasses what I was even expecting,” she said.

In like fashion, the piece “The Steadfast Heart” does not end at a heartrending moment. The scene continues and ends with heaven’s triumph.