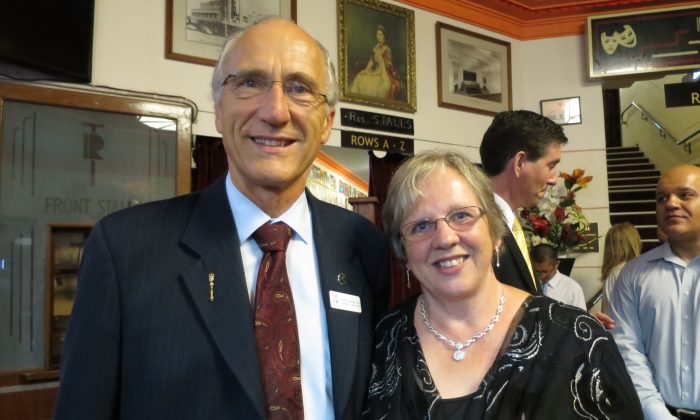 PERTH, Australia—With the resounding ring of a gong, the curtains are raised, and an ancient art form, nearly lost, is displayed on stage.

Mr. Peter Abetz and his wife, Jenny, were in attendance at a full house Regal Theater on Jan. 30 for the opening night of Shen Yun. Like many others, they were thoroughly impressed with the performance.

“It was absolutely wonderful,” said Mr. Abetz, a state member of Parliament in Southern River since 2006. “Overall, it was an overwhelming experience.”

Shen Yun Performing Arts, a New York-based classical Chinese dance company, has as its mission the reviving of China’s 5,000 year old divinely inspired culture. And with a tradition almost as long as Chinese civilization itself, the richly expressive, intensely rigorous classical Chinese dance is the perfect medium for conveying Shen Yun’s lofty aspiration.

Mr. Abetz was in awe of the Shen Yun dancers “fantastic movements.” Classical Chinese dance incorporates acrobatic flips, turns, spins, and aerial tumbling techniques. But he was most impressed with “Fairies of the Sea,” one of the gentler performances. Dressed in soft blue robes and with long silk fans, the dancers play the role of heavenly maidens floating on cerulean ocean waters.

“I guess the beauty of the movement, the colors of the costumes, the gracefulness of it all combine to create something very unique,” he added about the performances.

The music of Shen Yun’s live orchestra, a harmonious blend of Eastern and Western sounds, was another pleasing highlight for Mr. Abetz of the night’s performance.

“They say music is the language of the heart and soul, and is something that touches you quite deeply,” he said.

In particular, Mr. Abetz loved the erhu solo performance. While the erhu has only two-stringed, the bowed instrument is capable of playing a wide range of sounds.

“In its lowest and middle range, the erhu is especially stirring and somber, a quality eminently suitable for conveying the grand pageant of China’s history and the emotions of its people,” states the Shen Yun website.

Mr. Abetz says he would recommend Shen Yun to family and friends. “I’d say you’ve never seen anything like it before,” he said.

To the Shen Yun dancers, he would say: “Thank you for your amazing abilities, and you’ve certainly created a unique performance. I’d say a big thank you.”