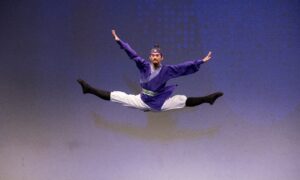 Shen Yun an Inspiration in What Humans Can Achieve

TORONTO—For Hilton Mijovick, attending Shen Yun Performing Arts at the Four Seasons Centre on Thursday afternoon was not an ordinary day at the theatre, but rather a deep philosophical reflection on life.

Mr. Mijovick, a former venture capitalist, had enjoyed seeing Shen Yun several years ago, but in recent years his sight has gotten poorer and he hesitated to come this time.

In the end, he did come, and he was glad he did.

“What a treat,” he said at the March 2 Shen Yun matinee performance.

New York-based Shen Yun, the world’s premier classical Chinese dance and music company, was founded to revive the genuine traditional culture of China and to bring it to the world stage. Since 2006, it has toured more than 100 cities around the world, featuring performances that draw inspiration from 5,000 years of Chinese civilization.

Mr. Mijovick was in awe of the dancers, comparing them to angels in heaven, whose artistry and costumes gave the impression that they were floating.

He said he believed the artists had achieved a pinnacle of physical mastery—beyond the ultimate.

“They had transcended there, the physical normal gravity and gravitas that most humans are held with,” he said.

“So it’s really an inspiration for all of us in what humans can achieve,” he said. “Can you imagine yourself floating there on stage? If you’ve worked for years to develop that, wouldn’t it be a lovely thing?”

The costumes also stood out for him.

“Because I have limited vision and what I have is very foggy, some of the costumes, I can barely imagine, but I got a sense of them being exquisite and meticulous,” he said.

Mr. Mijovick was also impressed by the music and the choreography.

“It’s art for the ears, for the sound and the senses, because the music was exquisite. And even with limited sight, I was able to see this choreography of beauty and acceptance,” he said.

Shen Yun features stories and legends from China’s millennia-old history, from what are believed to be its divinely inspired origins to today’s contemporary tales of courage and conviction.

Mr. Mijovick said he was leaving the performance feeling re-energized.

“I am going to walk faster, harder, stretch more, find more strength, more core strength, see if I can jump more,” he said.

“[I take with me the message to] just really enjoy finding more beauty and compassion, even for myself in the aging process, because, you know, I am becoming more ‘eternal’ every day. So I am making peace with that. This was an inspiration.”

Mr. Mijovick said he would heartily recommend Shen Yun to others.

“If you can, give yourself the gift of this two and a half hours of emerging and submersing in another cultural world.

“Even though it seems to be from the past, it is also timeless in the imagination. If you are not too stingy with yourself or with others, treat yourself and go! Make sure you do it.”

Mr. Mijovick’s friend, Mr. Faed, a lawyer, was particularly touched by what he saw as a message of compassion that emanated from the performance, which resonated with his own views of keeping one’s heart open and being accepting of others.