Shen Yun ‘An Inspiration For Me,’ Says Fashion Designer 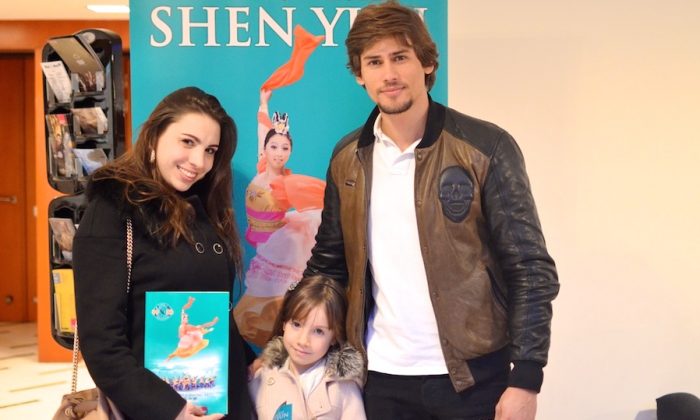 MILAN, Italy—At her mother’s strong recommendation to see Shen Yun Performing Arts, fashion designer Cristiane Belmonte eagerly rushed to see the performance at the Teatro degli Arcimboldi with her daughter and model Marcio Patriota on Feb. 22, and found out that they were one month early.

They finally returned to the theater on March 22, and were taken by the world-renown music and dance company that has four touring companies visiting more than 100 cities, performing an all-new program each season.

“It was beautiful,” said Ms. Belmonte after watching the performance.

The Brazilian fashion designer who grew up partly in the USA recently launched her brand, AMPB Milano, in Milan during the Fashion Week in February.

She was in awe at the variety of richly colored costumes, “They were amazing. The palette of the color-scheme was just incredible! It’s so vivid and lively. It is beautiful! The cuts were amazing. The play with the fabric creates a beautiful flowery illusion. It’s amazing!”

“Every costume in a Shen Yun performance is presented with brilliant colors, displaying a splendid spectacle,” according to the Shen Yun website.

“Shen Yun’s costume artists collect countless designs of traditional attire, ranging from those of emperors, ministers, and generals to the everyday clothing of the common people. They use bright colors to tailor and recreate hundreds of new pieces each season. Every detail is given meticulous attention and is a result of artistic inspiration and careful polishing. The designers stress harmonic balance and contrast. Their objective is an authentic presentation of the attire that comes from China’s divinely inspired traditional culture, and a consummate stage effect.”

Ms. Belmonte said, “It very much was an inspiration for me. It will have an influence on my next collection. It is so striking. The flow and the combination of the colors—the audacity to put together certain colors, that’s just amazing.”

Not only was Ms. Belmonte inspired by Shen Yun’s costumes, she was impressed by the Shen Yun performers. “The synchrony of the dancers is impeccable,” she said.

But the spiritual aspect of the performance, in particular, the artists’ embodiment of virtues such as compassion and kindness and simply helping other people through the stories in the vignettes, really uplifted her.

She said, “Good overcomes evil” was the message that resonated with her.

Ms. Belmonte was referring to The Power of Compassion vignette that depicted how compassion can overcome viciousness, and bring unexpected blessings.

China was once known as the “Divine Land,” with the belief that its rich culture was a gift from the heavens. Nonprofit, New York based Shen Yun, formed by a group of overseas, leading artists in 2006, seeks to the divinely inspired culture through storytelling dance and music.

“Principles such as benevolence and justice, propriety and wisdom, respect for the heavens, and divine retribution, all come to life, washing over the audience. Originating from Confucianism, Buddhism, and Taoism, these ideals are the essence of traditional Chinese culture.”

Mr. Patriota was equally inspired by the spirituality of the Chinese culture.

“I´m from Brazil, so this is very close to me, though I think that we lack a lot in that regard. I believe they [Chinese] are more spiritually oriented than we are. It´s inspirational,” he said.

Impressed by the overall performance, he said, “It was beautiful,” and “I loved it! I would for sure recommend it.”