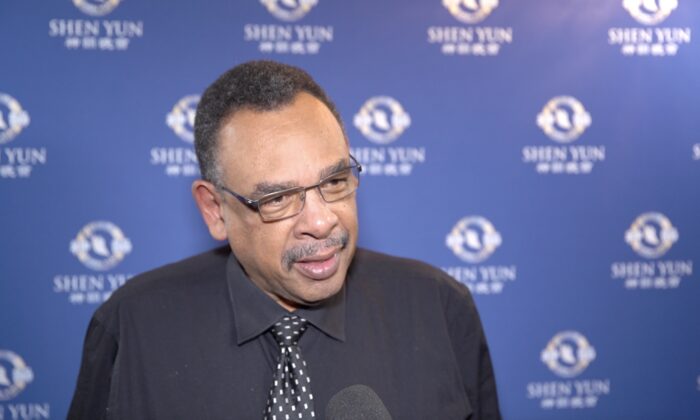 Shen Yun Performing Arts is a New York-based dance and music company that tours the globe each season fulfilling its mission to revive traditional Chinese culture.

“For 5,000 years, a divine culture flourished in the land of China. Humanity’s treasure was nearly lost, but through breathtaking music and dance, Shen Yun is bringing back this glorious culture,” the company’s website states.

Duncan believes missions such as Shen Yun’s are a very important thing.

As an accomplished musician himself, Duncan was interested in Shen Yun’s orchestra combining Chinese and Western instruments.

“It’s interesting because obviously it’s sounds from the traditional symphonic tradition, imbued with the culture of China, you know. And it’s really fascinating to see how they so intricately combine together to form a rather interesting and exciting accompaniment for the dance,” Duncan said.

Duncan elaborated, “What I’m hearing very clearly is that it’s characteristics of authentic—what I think is authentic, Chinese culture coming through. And so that combined with the dance makes for a rather exciting performance.”

The music of the performance also included a bel canto solo performance.

A Shen Yun program is divided into 20 or so vignettes which through story-based dance, depict scenes and retell stories from China’s rich 5,000-year history, its myths, and its legends.

Many of these stories very much touched Duncan’s heart.

“It’s good to be reminded that we’re not all from the same tradition, but there’s a lot of commonalities in terms of our beliefs, as far as deities, that kind of thing. So it just gives me an insight into a particular different way of viewing the beginning of time, the beginning of civilization, the beginning of culture,” he said.

It was an experience he would recommend.

“It’s always rather refreshing to see that in this world in which we live, there still is music that is rather alive and dynamic, that expresses, however, a culture that is quite different from ours, when we do, are able to share in a likeness, because we’re connected by our human spirits,” he said.