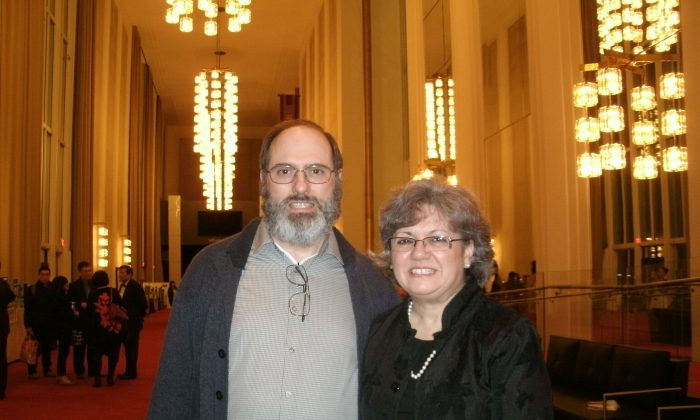 WASHINGTON—The power of a Shen Yun Performing Arts performance is often evidenced by the overwhelming positive reactions of its audience. Such was the case on Feb. 20, when Carmen Lado saw the evening performance with her husband, John Lado at the Kennedy Center Opera House in Washington, D.C.

“Very inspiring, very positive,” said Mrs. Lado, a design patent examiner. “I want to bring the family next year. It was just wonderful.”

Shen Yun has been bringing that wonderful performance—a 5,000-year journey of rich Chinese culture—to audience members all over the world since 2006, according to Shen Yun’s website.

China was once known as the Divine Land, featuring heroes, sages, dragons, phoenixes, emperors, and immortals. Through music and dance, Shen Yun tells the story of that divine culture—a culture that’s been nearly eradicated over the last half-century under communist rule.

In China, the communist regime felt threatened by the rich culture that once inhabited the land. Regime campaigns like the Cultural Revolution were unleashed to uproot those old beliefs and destroy the culture’s treasures as if to erase the China’s ancient civilization from the annals of history forever.

But that traditional culture is being revived by Shen Yun on stages everywhere—except in China.

“This show gave me a different view of China,” said Mrs. Lado, who is from Cuba. “I thought it was Communist China and I didn’t want to come. But then when I read a little more and I saw it was your history of China and your culture and how it was before. I said we got to go.

“I’m very happy you are doing this.”

The main experience to a Shen Yun performance is the dancing—classical Chinese dance. With its flips, spins, and leaps, each story is told through the elegant and gentle—yet richly expressive dance movements. Meanwhile, an accompanying orchestra combines the beauty of Chinese music with the power of a Western orchestra to produce one grand sound.

“I love the colors. I love the dancing,” said Ali Entezam, a senior scientist who attended the Feb. 20 afternoon performance with his wife, María José López Barragán.

“We loved it,” said Mrs. Barragán.

“I think the choreography was great, the colors, the movements, everything they did was beautiful, the music was beautiful.”