Shen Yun ‘Allows Us to Reconnect With Ourselves’: Swiss Dignitary 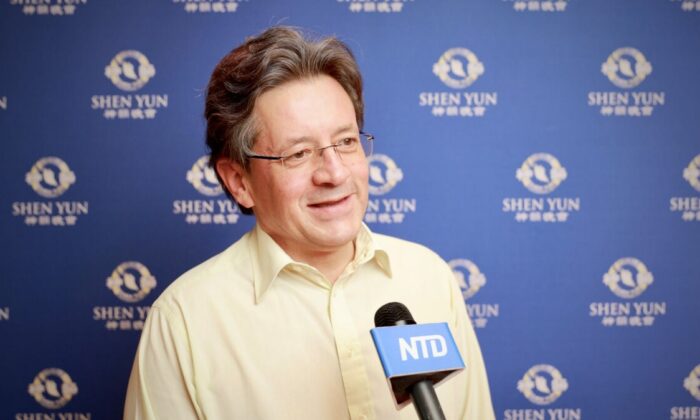 LAUSANNE, Switzerland—Sitting in the audience at the Theatre de Beaulieu on the evening of Jan. 16, Jean-François Chapuisat, a member of the Grand Council of Vaud, said Shen Yun Performing Arts guided him through a rollercoaster of emotions.

Shen Yun “touched the divine,” Mr. Chapuisat said. He called it an experience in the heavens and “I’m back on earth, but I’m not completely here yet.”

“There were moments that were really very funny. We go from one emotion to another, all in a certain lightness. I find it quite remarkable.”

The New York-based performing arts company has met with wide acclaim since its founding in 2006. In the 2023 touring season, Shen Yun’s eight equally sized companies are set to perform in more than 180 cities worldwide.

“[The show’s] technicality is pushed to the extreme, but all with a grace and a lightness,” Mr. Chapuisat said. “When you look at the faces of the dancers, they express so many things. It’s a journey, a real journey.”

Before the communist takeover in 1949, Chinese people had a deep belief in the divine. Shen Yun’s mission is to revive China’s 5,000 years of traditional culture and share with everyone the beauty and glory of pre-communist China.

Referring to Shen Yun’s mission, Mr. Chapuisat said the values presented by the performers are crucial to today’s society. Culture is what changes the world and Shen Yun artists have a lot to contribute.

“We’re in societies where we run—we pay very little attention to others. The show describes that with a lot of humor—where dancers run into each other while on their cellphones. But the message is so real. [Shen Yun] allows us to reconnect with ourselves and with certain values that we all have.”

In this show, there are values that are carried—values that I find beautiful.
— Jean-François Chapuisat

“When we talk about tolerance and benevolence—these values seem so obvious but are so violated everywhere,” he said. “In this show, there are values that are carried—values that I find beautiful. It’s a real pleasure.”

Mr. Chapuisat said his biggest takeaway from the performance is the power of hope. “I try to stay optimistic but it’s not always easy. Sometimes you get caught up in reality, in the current events.”

“The human being is capable of the worst but he is also capable of the best.” If everyone can stay optimistic then “that’s the divine in you. I’m convinced it’s in each one of us but you have to find it and let it speak,” he said.

Reporting by NTD and Jennifer Tseng.