Shen Yun ‘Absolutely out of this world,’ Says Media Professional 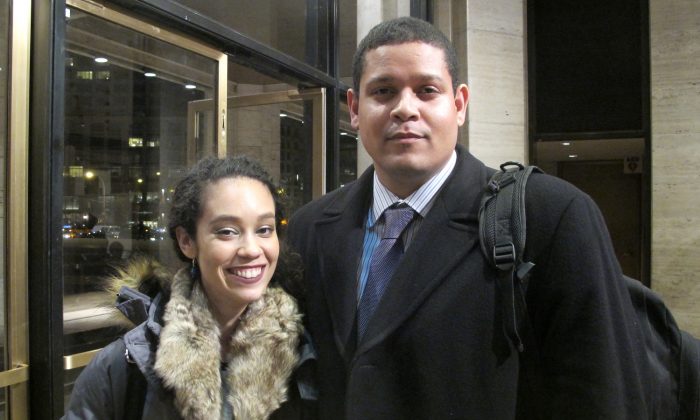 NEW YORK—Anddy Matos and Hector Bardeguez couldn’t have been more positive in describing their experience of seeing Shen Yun Performing Arts at the Lincoln Center on March 4—and being in the media business, they know what they’re talking about.

“It was amazing,” enthused Mr. Bardeguez. “It was absolutely out of this world. And I got so much more than just a dance concert. I was blown away by the music, the colors, the dancing, the spirit—Just wow!”

Ms. Matos was equally effervescent in her initial description of the evening, touching on virtually every aspect of the performance.

“I was really captivated by everything that I saw. The dancing was incredible, so precise, so uniform. The fashion was spectacular. I’m very into fashion, so [it] was like jaw dropping, ‘Holly molly!’ It was incredible, I loved it. The singing was …  I don’t even know how to describe it—it was so indescribable. It went really deep in my heart. It was something that really shook you to your core but in a very positive way.”

The overarching narrative of everything was just beautiful, uplifting.
— Hector Bardeguez

Elaborating a little more on what it was that moved her so much, Ms. Matos described how much she got out of the song lyrics.

“It was very positive, talking about heaven and about being your best self. And that’s a very positive message regardless of where you come from, where you live, and where you’re going. And that is very important. A lot of people struggle in life, so this is like, ‘Okay. I can deal with this,'” Ms. Matos said.

This positivity has ancient origins. New York-based Shen Yun’s aim is to revive traditional Chinese culture—a culture said to have been a gift from divine realms. The program notes explain: “Shen Yun draws inspiration from China’s 5,000-year-old civilization and the virtues it long embraced—compassion and loyalty, kindness and bravery.”

Mr. Bardeguez picked out similar themes in describing how Shen Yun struck him.

“The overarching narrative of everything was just beautiful, uplifting. It touches on universal themes of love and community and honor, and it’s something that everybody can really connect to,” he said. “[I] hope more people can get a chance to see it, because it’s just absolutely incredible.”

Speaking about the dancing specifically, Mr. Bardeguez said he could feel the “positivity and the spirituality” come through the dance pieces.

Mr. Bardeguez also mentioned the impact of the costumes, and how even they boosted his spirits.

“By just seeing the clothes I felt uplifted, and seeing the bodies move with the clothes, it really painted the mosaic that told the story. It was really wonderful.”

Shen Yun’s costumes are an integral part of why audiences find the experience so special. Every hand-sewn detail on every costume is designed to be a genuine presentation of attire worn at the time and place being depicted, whether they be the garbs of emperors, generals, or heavenly maidens. At the same time, the designers strive for harmonic balance and contrast in their color choices, according to Shen Yun’s website.

“The fashion was impeccable, breathtaking, the color combinations, the way the fabric just swayed,” commented Ms. Matos, with her special eye for style.

Wrapping up his thoughts, Mr. Bardeguez gave this advice to anyone seeing Shen Yun: “Really go in with an open heart and open mind and just expect the unexpected.”

“Everyone should go see it. I recommend it 100 percent,” said Ms. Matos.