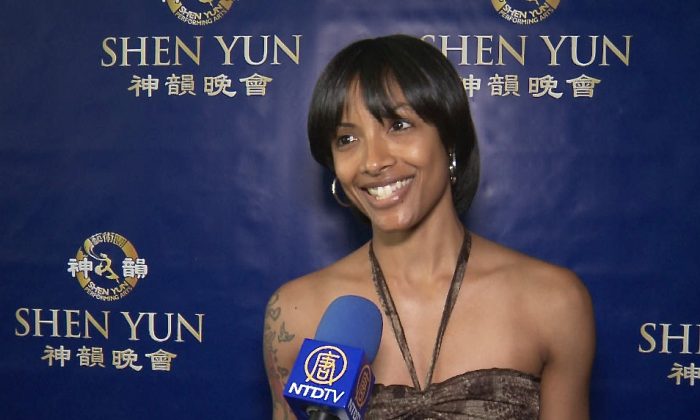 New York-based Shen Yun was established in 2006. It’s a non-profit organization dedicated to reviving China’s 5,000 years of divinely inspired culture through the performing arts. Having reached millions of people across nearly 20 countries and over 100 cities, Shen Yun is widely considered to be a global phenomenon.

Ms. Williams was drawn to the show’s colorful costumes.

“The most beautiful clothes I think I’ve ever seen, here on earth that is,” said Ms. Williams. “Absolutely gorgeous.”

“I love it. Something different,” she said. “Very organic.”

Shen Yun’s orchestra is a distinct blend, as the website explains: “A Western philharmonic orchestra plays the foundation, while traditional Chinese instruments lead the melodies. The sound produced is uniquely pleasing to the ear. The ensemble at once expresses both the grandeur of a Western orchestra and the distinct sensibilities of China’s 5,000-year-old civilization.”

Ms. Williams had many different feelings arise throughout the show.

“Inspiration. Awestruck,” she described. “And a lot of joy. I found myself smiling a lot.”

In Ms. Williams’ opinion, Shen Yun is an experience not to be missed.

“An amazing show. Must-see,” she said. “Definitely a must-see.”

Shen Yun’s New York Company will now be moving on to Santa Barbara, for shows throughout next weekend, March 28 and 29.