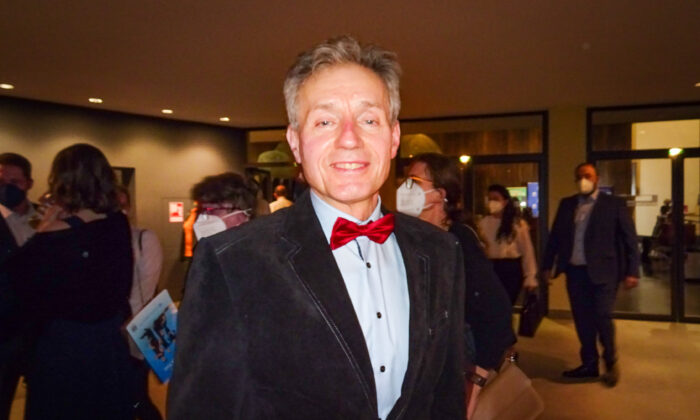 BERLIN, Germany—Due to the pandemic Sigi Grzeda had been missing live entertainment, something remedied by his going to watch Shen Yun Performing Arts which he described as “wonderful” and “brilliant.”

Originally from Poland and now working in Berlin as an engineer, Grzeda was at Shen Yun’s first performance at the Deutsche Oper Berlin on March 28.

It was the digital backdrop that impressed Grzeda, he said its scenery effect was “Wonderful! ”

When it came to a soloist singing with the bel canto technique in Chinese, he was able to understand the words in German projected on the backdrop. The song texts are original and written for the Shen Yun performances to allow the audience to better understand the song’s meaning.

“It’s beautiful with that context given,” he said.

Grzeda said his faith is important to him and he connected with the spiritual themes portrayed in Shen Yun, especially the ones expressed in a song sung by a soloist.

“It was a song about heaven and how the people came from heaven and then lost everything, lost their faith because the communists, destroyed everything,” he said. “The people from heaven were waiting for God, but they lost faith and that’s terrible.”

Astrid Schmitz, an attorney-at-law and public notary inspector, was in the audience on March 28.

Each of the dance pieces was presented with different colorful costumes, with colors coordinated with the digitally projected backdrop scenes.

Schmitz spoke about the overall effect the water sleeves dance had on her. “The water dance with the clothes, with the movements, with these flowing beautiful movements, that touched me the most. That’s where I was able to relax the most,” she said.

“The harmony, the energy, everything, these flowing movements, it was just relaxing … I can’t describe it any other way than relaxing and beautiful,” she added.

“It expressed about not getting lost in the hectic pace of the world, but simply to instead look inward and then look from the inside out and ask: ‘What can I do? Where do I come from? Where do I want to go?'”

She would recommend Shen Yun to her family and friends.

Peter Brevern, with his wife and a friend, appreciated the traditional values displayed in the Shen Yun story dances.

Shen Yun was formed in 2006 by artists from around the world who shared a wish to revive traditional Chinese culture.

“The values that are shown here are absolutely necessary and desirable. They have also contrasted a bit with China, the People’s Republic of China, haven’t they? I have to say that a lot of things are not right there—unfortunately,” said Brevern, a retired bank director.

China’s rich history has been under attack by the communist regime, which has systematically destroyed, distorted, and supplanted the traditional culture with its own.

Brevern appreciated the artistic skills of the dancers, the classical Chinese dances being a completely new experience.

He said that he came across a preview of Shen Yun on the internet, and “I thought to myself: ‘You have to see this!'”

“The jumps they do. The flips they do—I am very grateful that I could see this performance here. Quite wonderful,” he said.