A hope that China comes back to its roots 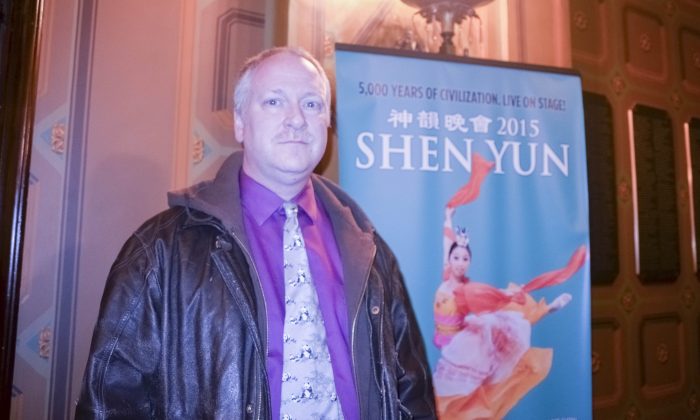 COLUMBUS, Ohio—Stephen Kelly and his wife wanted to see Shen Yun Performing Arts for quite a long time but the opportunity didn’t present itself. “Because of our travel schedule with our job, we never seem to be in the right city when a performance is in town,” Mr. Kelly said.

When they heard Shen Yun would be an hour away from their home at the Ohio Theater on March 11, the conditions were now favorable to go. They took their daughter who was home from college and the one responsible for their interest. “I am so glad we did,” he commented.

“She has a great love for China, the language, and the culture, and her excitement has gotten my wife and I interested in Chinese culture as well,” said Mr. Kelly, who is an auditor.

“A Shen Yun performance features the world’s foremost classically trained dancers, a unique orchestra blending East and West, and dazzling animated backdrops,” states the company website. It takes audiences to far away places and heavenly realms, from ancient times in legends through to modern day China.

“It was magnificent,” said Mr. Kelly.

Shen Yun’s mission is to restore this traditional Chinese culture and associated wisdom and values to its fullest extent.

“I am very happy that the Shen Yun organization is promoting traditional Chinese culture that, unfortunately, has been attempted to be stamped out by the Communist Party in China. It is so good that such a valuable, deep treasure is being preserved in this way.”

The heart of Shen Yun is classical Chinese dance with its expressive forms, which are perfect for telling stories. Along with this type of dance, Shen Yun presents  folk and ethnic dances.

“The many distinctive ethnic groups within China and around her borders provide a wonderful array of material from which to choreograph and compose. These dances might whisk you away to the plains of Tibet, the shores of a Dai village, or the sprawling plains of Mongolia,” states the company website.

“I was very happy to see the incorporation of the various different ethnic groups within China. A lot of people believe China is just this very large homogeneous culture. There are different areas, which each has their own distinct flavor. And we are glad that [Shen Yun] brought that part of the Chinese culture in—that it is not just one culture, it is many different [ones] within the sphere of China.”

Two story-dance performances that resonated with Mr. Kelly centered on the traditional spiritual meditation discipline, Falun Dafa, also known as Falun Gong, as well as the persecution they have been experiencing in China for the last 16 years.

“I understand the powerful feeling of a group that is being persecuted because of their religious beliefs,” he said. This is due to “my own background as a Christian—that Christians have been persecuted throughout history, including in China today.”

He elaborated on Falun Gong as portrayed by Shen Yun, and Christianity: “…We do have a lot of common ground: desire for compassion, a desire to speak the truth, and a desire to hold fast to your beliefs regardless of persecution. Those are the things I can respect.”


I hope someday that the Chinese people will understand the terrible damage that the Communist Party is doing in their country.
— Stephen Kelly

“I hope someday that the Chinese people will understand the terrible damage that the Communist Party is doing in their country and come back to their roots. Come once again to respect the thousands of years of history and culture that they are losing because of communism,” concluded Mr. Kelly.