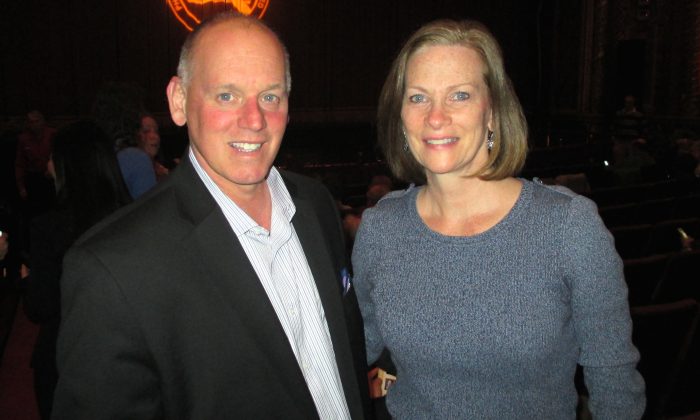 BOSTON—Shen Yun Performing Arts is a revival of history and culture that bridges the differences among peoples, said community leaders Connie and Timothy Braceland, seeing the performance at the Citi Wang Theatre, Feb. 28.

“To me it’s relaxing, a bit spiritual, and it keeps going back to the history—to the culture, to the way it was before,” said Mrs. Braceland, business development officer at Watertown Savings Bank.

Mrs. Braceland, awarded Community Bank Hero and commended by the mayor of Waltham, Mass., has spent her 30-plus years volunteering for her community and serving on the boards of organizations like the Reagle Music Theatre and the Waltham Rotary Club, where she and her husband heard about Shen Yun.

“It was trying to capture the history of the culture,” said Mr. Braceland, a financial adviser and former chair of the Needham Chamber of Commerce. “They’re very talented, very good.”

Mr. Braceland had watched the dancers closely, and was impressed with the level of attention and detail put into the performance.

The dancers perform classical Chinese dance and folk dances from the many minority ethnic groups across China, as well as the majority Han. The variety added to the experience for Mrs. Braceland, who said she enjoyed the folk dances, such as the Mongolian Chopsticks.

“People need to learn more about other cultures, there’s no question about that,” Mr. Braceland said.

Mrs. Braceland said that she appreciated learning about China’s 5,000 years of history and culture, and was glad Shen Yun is reviving it.