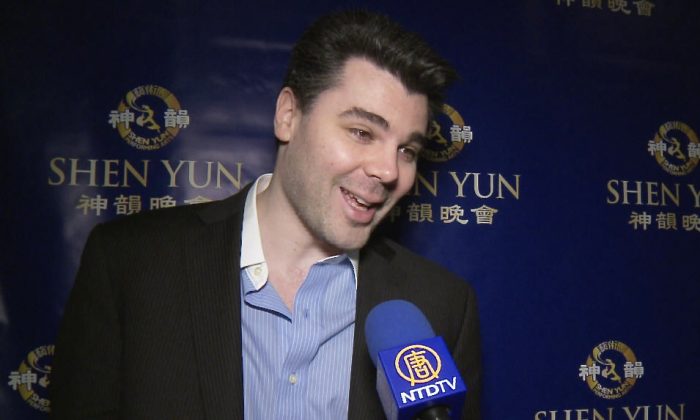 Vlad Popescu talks about his Shen Yun experience at the Segerstrom Center for the Arts, in Costa Mesa, on March 11. (Courtesy of NTD Television)

COSTA MESA, Calif.— Vlad Popescu is a director in the insurance business and was happy to see Shen Yun Performing Arts at the Segerstrom Center for the Arts, on March 11.

According to New York-based Shen Yun’s website, “For 5,000 years divine culture flourished in the land of China. Humanity’s treasure was nearly lost, but through breathtaking music and dance, Shen Yun is bringing back this glorious culture.”

Mr. Popescu, who is from Romania in Eastern Europe, was very pleased with Shen Yun’s presentation of true Chinese culture.

“It’s amazing,” he said. “It’s a great culture. My wife and I have the utmost respect for Chinese culture. It actually predates a lot of the European culture by thousands of years, so that’s impressive, and tonight is special for my wife and I. It’s a special treat of Chinese culture.”

Mr. Popescu thought attending Shen Yun would be a wonderful evening for any couple.

“It’s a great date night with your wife or significant other, and at the same time it’s a great intro to Chinese culture for those who are foreign to it.”