Shen Yun a Spark of Positivity in New York 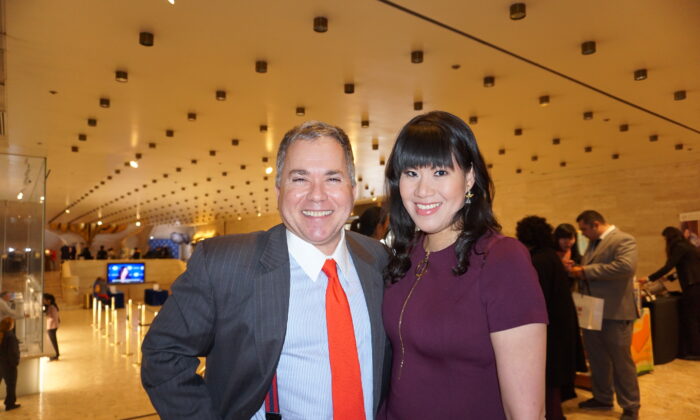 NEW YORK—The beauty of great art can be truly restorative, and for Peter Bianco, Shen Yun Performing Arts was just that.

“It’s very uplifting,” Bianco said at Lincoln Center having seen the New York-based company’s opening performance in the city this season. “A lot of this world is very negative, but here it’s very peaceful and positive.”

Bianco, who is in banking and real estate, attended the performance on March 5, 2020, with Tiffany Chiang, who felt similarly about the experience.

The two were interested in seeing something that couldn’t be seen anywhere else and found that in Shen Yun‘s revival of China’s divinely inspired 5,000 years.

“It’s a beautiful performance. It’s very colorful and very professional; excellent all the way through,” Bianco said, with praise for the color and artistic caliber of the production. “And it was very inspiring.”

Through classical Chinese dance, Shen Yun artists tell stories and legends of China from inception to the present day, detailing various dynasties and regions’ folk dances along the way. The couple pointed out one dance, set in a dreamy pavilion where the court ladies carried bronze lanterns, where they felt great peace and happiness.

“I thought that was amazing,” Bianco said. “I don’t know how that was possible but they did a fantastic job.”

Bianco said his own education, being in the West, spans just 2,000 years when counting in our past civilizations. But China’s history was passed down uninterrupted for 5,000 years, and it made for something to behold.

“It’s very refreshing to see something that’s been around for so many millennia,” he said. “A culture that’s been thriving for 5,000 years is quite remarkable.”

The End of the ‘Divine Land’

Ancient China’s long line of unbroken tradition came to an end in 1949, when communists won out and started doing away with traditional culture and belief in the divine through campaigns like the catastrophic Cultural Revolution.

“Most of the show is all about the beauty of the Chinese culture and the movement and grace, but there are two stories about communism, as a glimpse of the brutality and the violence of communism,” Bianco said. The two storytelling dances are set in the modern-day, where people of faith carry on the traditions of moral values like faith in the divine, integrity, and compassion, but face persecution from the communist regime.

“But in the show it shows that, hopefully, someday, they’ll be free again, and their eyes will open, as in the first story,” Bianco said.

Bianco added that communism is an American concern as well, as many young people today don’t understand the reality of communism and socialism and have been taken in by lies.

“Now in the show, their eyes were opened,” he said. He hoped Americans would do the same.

With reporting by Janita Kan and Sally Sun.