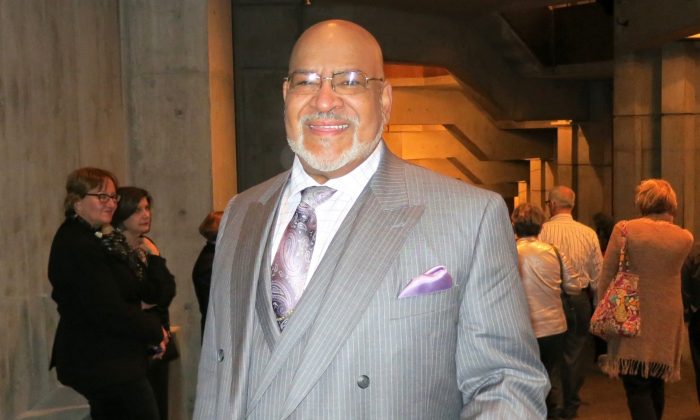 SYRACUSE, N.Y.—Father of eight and retired military man, businessman, and politician Ralph Jones was excited with the prospect of seeing Shen Yun Performing Arts, and then not disappointed. Throughout the Jan. 29 performance, he continued to feel excited and joyful, and he took away a universal message through an array of emotions he said the performers were transmitting.

“I can feel the emotions that they are feeling,” Mr. Jones said at The Oncenter Crouse Hinds Theater.

“I see there is a commonality across the board, of all cultures when it comes to the basic. You and me, we all want safety, security, we all hope for love and joy and peace in our life,” he said. “And it resonates with me because, I feel the emotions that they show. You know, it is 5,000 years in two hours on the stage, but in my 67 years, I felt those ups and downs and those joys and all that happiness, too, and the sadness that we see in it. So it resonates very deeply with me.”

The universal values of joy and love and peace that Mr. Jones saw was presented in the traditional Chinese culture, which New York-based Shen Yun brings to life on the world’s stage every year. Since its inception in 2006, the company has gained world renown and has danced on the stages of the most prestigious venues around the globe.

The music and dance company revives the art forms of classical Chinese dance and the bel canto vocal technique, with artistic innovations like an animated backdrop and an orchestra harmonizing East and West.

The performances start out with a bit of explanation from emcees, he said, and then the outstanding choreography coupled with the music and visually engaging backdrop work in such a way that “you are almost there. … I can feel myself there.

“It is breathtaking, captivating, inspiring, it is overwhelming, and the dancing is beautiful. The orchestration is outstanding and the visual effect is just absolutely captivating,” Mr. Jones said.

Mr. Jones described the vastness he saw that provided such joy—the millennia of Chinese history—and how engaging the performance was that it could provide such joy.

The performance starts with the inception of China’s divinely inspired—literally—culture. The stories then take the audience through many different dynasties, scenes from the novels that make up the pillars of Chinese literature, and mythical beings.

Shen Yun even touches on China’s modern history, with a scene showing the Red Guards, zealous young people under Mao’s communist rule, who encounter a group of supernatural monks. The dance touches on the fact that traditional Chinese culture was nearly destroyed. But Shen Yun’s story-based dance ultimately focuses on the hope that remains with the people.

Mr. Jones could feel himself getting emotional and welling up with tears.

There was so much sadness in seeing the culture nearly destroyed, but there is just as much joy in the world, he explained. This was a point he saw highlighted in one of the solo vocalists’ songs, with the Chinese lyrics projected on the backdrop with English translations. Billions and billions of individual lives have come to this world from heaven, with a journey and mission, he said. Seeing that concept culminated in the performance, “seeing it visually, that’s what makes it so joyful.”

“The performances are so great that you can, I can embody the spirit of what they are doing. I can feel the soulful journey,” he said. “Each performance has … a different message, and all of them have been inspiring.”