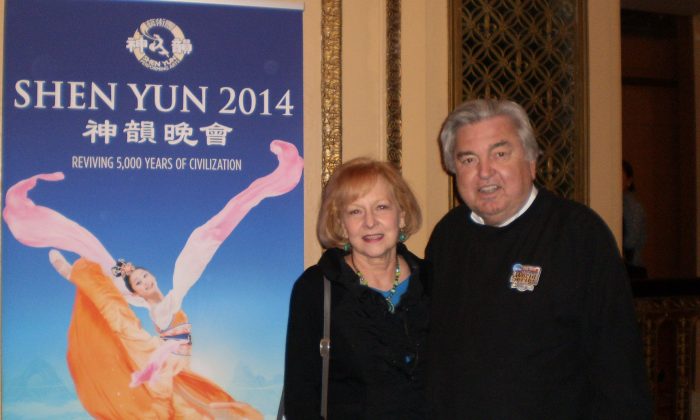 OMAHA, Neb.—”Oh we love it, it’s so bright and colorful, it’s really really interesting, we haven’t ever seen anything quite like it,” said attorney James Martin Davis after seeing Shen Yun Performing Arts at the Orpheum Theater on March 8.

New York based Shen Yun has four touring companies that tour the globe simultaneously, captivating theater goers in 20 countries and over 100 cities each season.

“The entertainment value is just terrific and I’m just so impressed with the gracefulness and the artistry and the way they move together, it’s like schools of fish moving together and the girls are so feminine and so graceful,” commented the attorney.

“The males, they’re super very very athletic, you know, in their moves and, yeah we’re just really enjoying it,” he added.

Mrs Davis agreed. “So coordinated, all those movements so very very coordinated,” she said.

Shen Yun’s mission is to revitalize traditional Chinese culture. While classical Chinese dance is at the core of its program, it also showcases elegant handmade costuming, and digital interactive backdrops.

“And so much history,” Mrs. Davis said appreciating the snippets of 5000 years of Chinese civilization through the performances. “So much history that’s there that I wasn’t even aware of”

“It’s covering all of China and China is such a big place. Mongolia and southwest China, the Taos—it’s very very interesting. Most of us in America are unfamiliar with Chinese history or even or even Chinese geography and this is kind of giving us a lesson in all those things,” Mr. Davis explained.

Mr. Davis exclaimed, “It goes so fast, sometimes you’ll go to some show and it’ll be boring, but by gosh, it’s just one right after another and the backdrop’s are wonderful, you know, with the waves and how the players jumped down coming and all of a sudden they traveling to the sun, it’s amazing!”

“I’m just fascinated by all of it…and the beauty!” Mrs. Davis commented.

“The songs are almost religious songs talking about the creator and heaven and that’s integrated with the backdrop like from the beginning when they talked about the beginning of the universe and so there’s all that religious aspect to it that I never knew was inherent [in Chinese culture].”

Mr. Davis said ultimately, “It shows how it’s all integrated together, it’s just a really an enjoyable evening”