Shen Yun a Pure and Positive Experience in Washington, D.C. 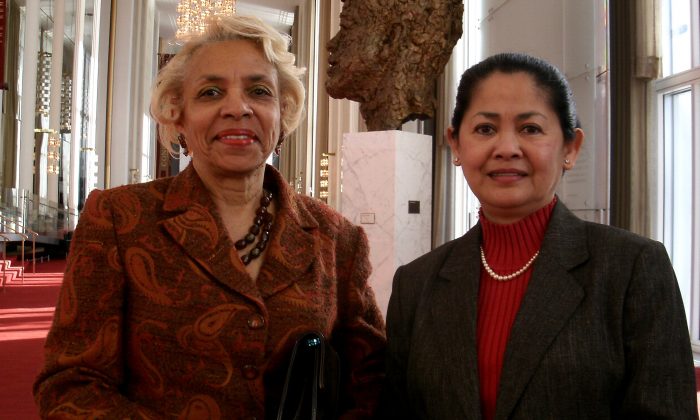 WASHINGTON, D.C.—Imagine a performance so pure, so beautiful, and so meaningful that it leaves you with a profound experience. That is the effect that Shen Yun Performing Arts is having on many of those who see the performance.

Shen Yun started out in 2006 in New York with a mission to revive 5,000 years of divinely inspired Chinese culture. Since then, the performance has introduced millions around the world to traditional Chinese culture, and has sparked a renewed interest in China’s ancient culture.

“You see purity,” said Neela Henson, who used to work for ExxonMobil, after watching the performance at the Kennedy Center Opera House in Washington, D.C.

Ms. Henson said that the performance made her feel like “you have heaven to look forward to.”

She attended the performance with Alexis Tolliver, who was equally impressed.

“The visualization was spectacular … I truly enjoyed this exemplary performance,” Ms. Tolliver said after the performance.

At the core of Shen Yun’s performances is classical Chinese dance, an ancient art form that is nearly as old as Chinese civilization itself.

Ms. Tolliver said she has attended performances on Broadway for years, but has never seen anything like Shen Yun, describing the performance as “very positive, philosophical, and spiritual.”

“I just feel that the program was magnificent because it was educational,” said Ms. Tolliver who was an elementary school teacher for 40 years.

In its performances, Shen Yun draws upon China’s rich and vast history, bringing ancient tales and legends as well as stories from contemporary China to life.

Ms. Tolliver said that she especially appreciated the parts of the performance that touched on the situation in present day China. One such thing that Shen Yun highlights is the current persecution of practitioners of the spiritual discipline Falun Gong in China by the Chinese Communist Party.

Ms. Tolliver said that even though what is happening in China is negative, Shen Yun delivers everything in a positive way.