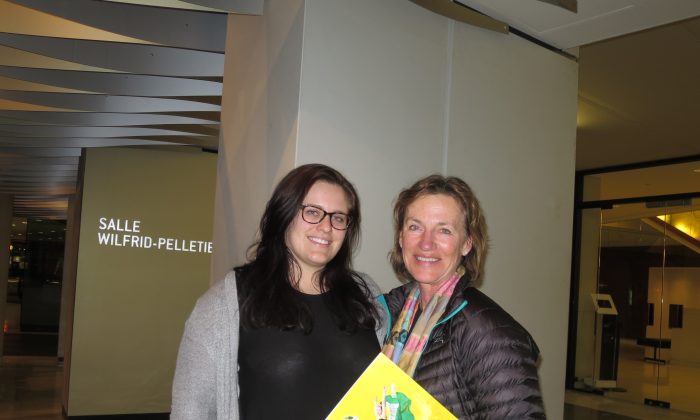 Renée Provencher and her daughter at Shen Yun Performing Arts in Montreal on May 1, 2016. (Weiya Yang/Epoch Times)

MONTREAL, Canada—Shen Yun performed its last Montreal show of the year on May 1, and theatregoer Renée Provencher said it was a privilege to experience it.

“It is a beautiful feast to watch all the dances, but to understand the [cultural] meaning is so much more of a privilege for us,” she said after the evening performance of classical Chinese music and dance at Place des Arts.

Ms. Provencher, an entrepreneur and business owner, attended the performance with her daughter Stephanie, who said Shen Yun’s mission to revive traditional Chinese culture was invaluable.

“It’s important and I think more people should be exposed to it,” she said.

“I think it’s good that there’s an effort being made to make this Chinese culture more accessible to everyone.”

New York-based Shen Yun was formed by overseas Chinese artists in 2006. Recognizing the traditional culture and art forms were nearly extinct after decades of suppression by the Chinese communist regime, the artists set out on a mission to restore it through Shen Yun.

“It’s beautiful,” she said. “You just want to float away with [the dancers]. It’s very special.”

“From a technical standpoint too, you really appreciate how precise [they are] and it’s really impressive,” said Stephanie. “Very, very powerful.”

Philipe Fegerean, an electrical engineer and PhD student, also attended the show and was shocked that the performance was not allowed in China, where traditional art forms remain suppressed.

“It is really refreshing to find out about all of these traditional presentations [in Shen Yun],” he said.

“It is sad that they don’t show these in mainland China, but we are actually lucky to see all of this folklore and it is invaluable. It is hard to understand why a government would deprive their people of this culture, this heritage, but I am lucky to get to appreciate it.”

“The dancers are all great and the performance is impeccable.”

Information technology specialist Alex Angulo came to the performance with his partner Ondine Ilinca, and said Shen Yun was educational and highly entertaining.

“It’s a good way to keep the tradition alive, definitely,” he said. “I think it’s a beautiful show.”