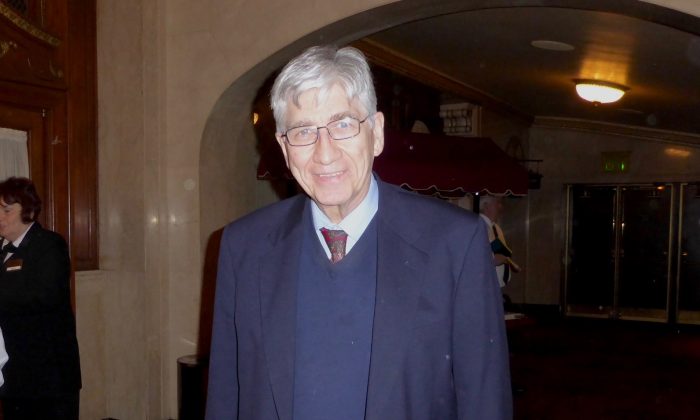 John Prendergast thought Shen Yun was phenomenal, after seeing it at the Benedum Center for the Performing Arts in Pittsburgh on May 10, 2016. (Frank Liang/Epoch Times)

PITTSBURGH—The restoration of a culture is quite the sight to see, and all the more so when it is 5,000 years of divinely inspired history, culminating into a piece of art all in one night, according to the attendees at the Benedum Center for the Performing Arts in Pittsburgh on May 10.

“The culture of China, it is so good that it is being restored, and hasn’t been forgotten,” said John Prendergast, a physician, who attended Shen Yun Performing Arts Tuesday night, May 10. “[It] was a part of China that was beautiful. It was enchanting. The energy that was shown is just a phenomenal thing.”

“And to have lost that—it is sad, because at some point, the Chinese need to see this,” Mr. Prendergast said.

Hence, Shen Yun. According to the website, this New York-based company was established in 2006 by like-minded artists who wanted to share the authentic traditional culture with the world, and it has since grown to four touring groups that cover about 100 cities each year.

Mr. Prendergast thought it was a wonderful mission. These young artists now had an opportunity to flourish and become professionals in these traditional arts—the company’s dancers are some of the world’s top classical Chinese dancers, for instance. And they were really “able to work together to create something that is beautiful,” he said. “That’s a wonderful thing.”

“It is a beautiful culture, it is something that should remembered, and that the amount of energy, the amount of talent that is there, is phenomenal,” Mr. Prendergast said. “A beautiful, phenomenal experience.”

Jennifer Reagan, who attended the performance with her mother, thought Shen Yun was just unbelievable. Though she had missed the beginning of the performance, she felt she had gleaned so much in terms of culture, China then and now, and even spiritual themes of humanity.

The production was gorgeous, the performers were so talented. But then sitting there, watching the Mongolian ethnic dance right before intermission, she felt sad that this art could not be preserved in its homeland. She was happy that in America the audiences could see upbeat drum dance, seemingly taking place in the lush Mongolian grasslands, but it was a shame.

“I would say, if anyone has the chance to see it, that would be the best experience that they could see,” Ms. Reagan said.

Cathy and Denis Rudy felt similarly. From the moment Mrs. Rudy entered the theater, she had been put in a good mood, picking up on the original music being played through the halls as people were being seated. The Chinese-sounding flute melody was “just so lyrical and so beautiful,” she said.

The couple was completely intrigued, completely interested, and commented on the many facets of beauty they saw in the performance.

Casey Jacob, who is studying cinema at a university, greatly enjoyed the storytelling. He said he felt the emotions of the characters come through in music and dance. He could see the performers’ feelings, and they connected with one emotionally.

For example, in one story an elderly couple in modern China starts their day together, and share their joy in the spiritual meditation practice they practice, Falun Gong, which became popular rapidly in China in the 1990s because of the health and spiritual benefits that so many of its practitioners received.

The story touches on the persecution ongoing in China today, due to the fact that the Chinese Communist Party outlawed the practice after the number of practitioners surpassed that of the Party.

Mr. Jacob said there was a lot of feeling in that piece: “It was really touching. It definitely made me feel for the couple,” he said. “I felt kind of misty-eyed.”

It was terrible that they were being persecuted, and great that this issue was being brought to light, he thought.