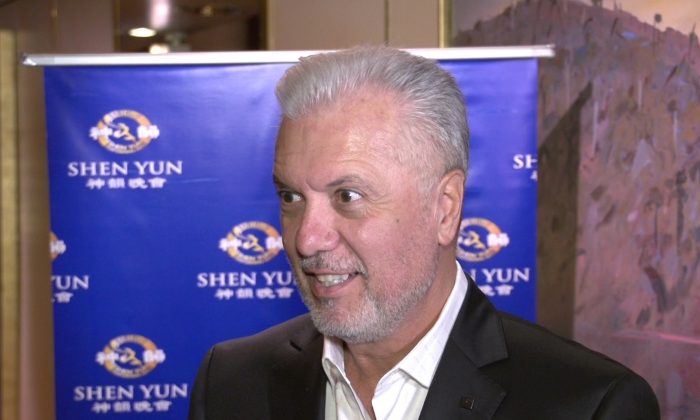 MELBOURNE, Australia—“Shen Yun for me is one of colour. It’s a veritable feast for the eyes. It fascinates me that we’re allowed to see something as grand and beautifully staged,” said George Donikian, Television News Anchor, radio and media professional, during the interval at the Shen Yun Performing Arts International Company’s performance at the State Theatre, Arts Centre Melbourne on Friday, evening March 28.

Mr. Donikian felt that the inner beauty and passion emanating from the dancers gave the audience an extra level to appreciate.

He said, “when you see something as well structured, delivered with poise, and that word called ‘elan’, which is all about doing it with real … belief, I think anytime you have talent that is skilled, performers deliver it.”

Shen Yun is based in upstate New York and according to their website, “Through the universal language of music and dance, Shen Yun weaves a wondrous tapestry of heavenly realms, ancient legends, and modern heroic tales, taking you on a journey through 5,000 years of Chinese culture. Its stunning beauty and tremendous energy leave audiences uplifted and inspired.”

Mr. Donikian appreciated the experience of the Shen Yun performance.

“One of the hardest things to do in theatre anywhere is to allow you to immerse yourself, to be totally engaged. And this particular program, the way they’ve created it, allows you to almost forget where you are and totally absorb this journey, 5,000 years back into this glorious time of China’s golden period,” he said.

“I think it’s fabulous. I think we live in a world that needs something, another element if you know what I mean, and spirituality, that Truthfulness, that cleanliness, for want of a better word, Godliness. … I think it’s something that lifts you. And anything that can inspire, I believe has got to be good.”

“I was moved constantly by the quality, the dexterity, the beautiful balance and poise of the performers. … they bring to another part of this exercise, a wonderful passion.”

“Classical Chinese dance is at the heart of what Shen Yun does. Known for its incredible flips and spins, and its gentle elegance, it is one of the most rigorous and expressive art forms in the world,” the website explains.

“I think it’s a fantastic opportunity to just sit, relax and allow the technology, the music, and the skill to just wash over you. It washes through you too. It’s like beautiful classical music. It actually is like a wonderful purification. So, here we are, we are almost meditating, along with the performers.”

Shen Yun also has solo singers, two sopranos and a tenor in this performance. According to the website “The primary trait that distinguishes the singers of Shen Yun is their use of bel canto technique to sing Chinese text. This means that the singer must, while continuing to meet the challenges inherent in bel canto technique, retain proper Chinese pronunciation and diction. Today, these singers’ ability to do this is unparalleled.”

Rachael Yuning Bastick, originally from Toowoomba Queensland, Australia was the first soprano for the evening and she sang, “Why do you Refuse”. Ms. Bastick is also a principal dancer in the company.

Mr. Donikian said, “the song that we heard the soprano early in the performance, she felt every word. Yeah, difficult, comprehensive, but committed. And I think it’s wonderful.”

The second soprano, Min Jiang, singing “The Music is Truth” enthralled the audience. They were unable to contain their appreciation and burst into spontaneous applause even before she had finished. She was encouraged to perform an encore.

The Shen Yun website says, “Over its past 60 years of rule, the communist regime has treated traditional Chinese values—centered on the idea of harmony between heaven and earth—as a threat to its existence. And in its systematic campaigns like the Cultural Revolution, it has uprooted traditional beliefs and destroyed ancient treasures—bringing traditional 5,000 years of civilization to the brink of extinction.”

Mr. Donikian felt that in this day and age it was so sad to see such a divine culture suppressed.

He said, “This extra dimension, this meditation if you will, that takes you to another plane of consciousness, I think is enlivening. I think it’s fabulous! And I’m stunned to think, that in this day and age, we live in a world where people want to suppress people and diminish them, instead of giving them light, giving them life and letting them fly.”

He continued, “I think we all have something to learn from Shen Yun. Just as it is working hard to recapture and to showcase a magnificent period in China’s great history that is 5,000 years of cultural moments where each dynasty delivered yet another golden opening. We can sit back and reflect and understand that there are so many threads that go back 5,000 years. I think there is something to be learned, and certainly something to be shared.”

“With state-of-the-art graphics technology, Shen Yun’s digital-backdrop team creates vividly animated settings, extending the stage and transporting the audience to a world where heaven and earth are one,” the company website explains.

Mr. Donikian appreciated the digital backdrop and how it seems to interact with the dancers on stage. “I love the use of the new technology, all this interactivity,” he said.

Mr. Donikan is a media professional with 30 years experience as a television news anchor, during which time has anchored news for Network Ten, Nine, and was the inaugural anchor for the SBS World News. He also has extensive radio experience as a news reader, presenter and talkback host. He is very community minded and committed to humanity and has various positions such as Redkite Ambassador, and Australia Day Ambassador.