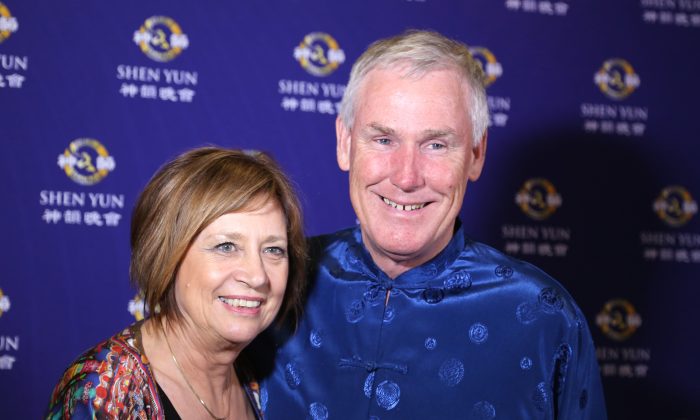 ADELAIDE, Australia—Shen Yun Performing Arts opening night at the Adelaide Festival Centre was certainly a feast for the eyes and food for the soul for the many audience members. This was reflected in the continuous applause and encore performance by soprano, Haolan Geng. Tonight, Feb. 20 was the first of four performances in Adelaide.

In the audience was Michael Atkinson, Sate Member for Croydon, who said, “I am delighted by it and enjoying it tremendously.”

Mr. Atkinson was appointed to the Ministry in 2002 and held the portfolios of Attorney-General, Minister for Justice, Minister for Multicultural Affairs and Minister for Veterans’ Affairs, currently he is the Speaker of House of Assembly.

What impressed Mr. Atkinson was Shen Yun’s effort to preserve traditional Chinese culture which has been brought to the brink of destruction by the Chinese communist regime.

“It is a most impressive production, and clearly there are centuries of cultural development behind it,” he said. “Of course in the last 60 years that culture has been quite oppressed.”

He commended Shen Yun for working to preserve those centuries of culture, and bringing them in a comprehensible form to audiences around the world.

Although Shen Yun has performed in many countries since its inception it cannot perform in China due to the communist regime’s attempt to destroy the 5,000 year culture.

Mr. Atkinson felt many would appreciate the return of traditional culture and learn many lessons from the history.

“I think the message is the richness of the culture over so many centuries, and of course the lovely old Chinese landscape before it was spoiled by modern communist controlled industrialisation. So I imagine for older Chinese people there is a powerful nostalgia in the beauty of their landscape as it once was,” he said.

“Of course it is important for Australians who aren’t of Chinese origin to see China as it once was, and it can be again.”

He said he would recommend the performance to others.

“I would say there is an ancient Chinese culture, a culture that extended to the middle of the 20th century which they are unfamiliar with, and which they should see for its beauty, both of the landscape portrayed cleverly on the backdrop of the stage, and also in the dance.”

He also enjoyed the spiritual aspect of the performance. “I think there is richness also of Chinese spirituality, the spirituality of the Middle Kingdom, which is of relevance worldwide today,” he said.

‘It is truly beautiful’

Jennifer Rankine, state member for Wright, was also at the performance.

“The show is beautiful. It is truly beautiful, it’s exciting, it’s entertaining, and it is a joy to watch,” she said.

She was ecstatic with many aspects of the performance.

“The highlights for me have been the magnificent costumes, the amazing backdrops to the performances, and the ability of the dancers to do the most amazing things.

“The skills and talent, both in their dance, the expression they bring to it and their athleticism are just truly awe-inspiring.”

Shen Yun portrays myths and legends spanning from ancient times to the present day and bringing them to stages around the world.

“We see the elements of Mongolia, the slightly different costumes and the way they dance. Tibet, it’s truly beautiful! The beauty of the female dancers and the athleticism of the men are just magnificent.”

The high tech state-of-the-art digitally animated backdrops enhance the storytelling and give viewers the feeling that they are part of the scene.

“It is all spectacular and brings together these beautiful traditional stories. It’s so lovely to see also different parts of China being brought into the story,” she said.

As the former minister of education Ms. Rankin could recognise and appreciate the educational value of the performance. She said it was wonderful to have insight into a culture of so many years ago and she is sure that through this understanding a stronger and more cohesive community will emerge in South Australia.

“Through art, through dance, through these stories, we are learning the history of the Chinese people. There are very many different cultures in China, and it is very important to understand that there are many different stories that need to be shared to have a full understanding of China.”

She saw in the performances great kindness and compassion and vibrancy and pride in their culture.