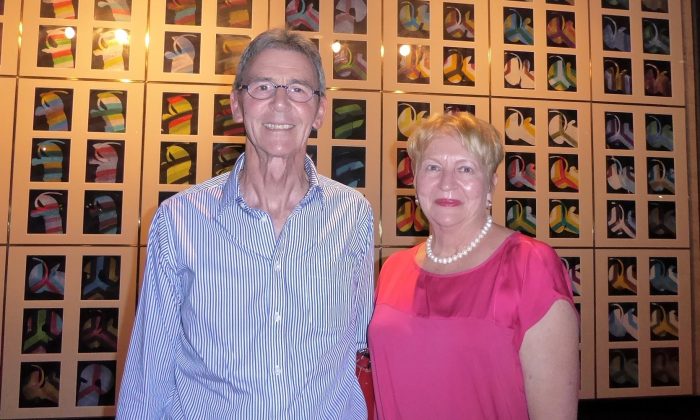 ADELAIDE, Australia—At the evening performance of Shen Yun Performing Arts in the Adelaide Festival Theatre on Feb. 9, one word sprang to John Reid’s mind of the feeling he experienced watching the performance.

“Joyful, joyful! And very pleased that we came,” he said.

Mr. Reid, an engineer, attended Shen Yun with his wife Carolyn Reid, the company director for their family-owned business. The couple hopes to wind down and retire soon.

Shen Yun, based in New York, is in its 10th year of global touring. Its mission is to revive the essence of authentic Chinese culture through the medium of classical dance, coupled with the unique blend of Eastern and Western music.

“I think they’re fantastic. It’s something that can be done best through dance because the dance can be a little bit exaggerated. It adds a lot of feeling, a lot of depth; it’s just a great show,” he said.

“China’s deep cultural traditions are contained in classical Chinese dance, allowing its movements to be richly expressive, such that the personalities and feelings of the character can be portrayed with unparalleled clarity,” according to Shen Yun’s website.

For Mrs. Reid, the ethnic dances displayed throughout the performance reached “intense perfection” and also connected with her. One in particular, the dance titled “Drums of the Grasslands” where a hearty group of horsemen carrying paddle drums take to the open plains evoking images of flying eagles and wild stallions.

Aside from the dancing, Shen Yun also displays digital backdrops that create vividly animated settings, which extend the stage and transport the audience to magical worlds.

In particular, Mr. Reid was struck by the backdrop and how the characters kept appearing and re-appearing on stage.

“It’s very clever, and there’s a nice lot of humor there too. … It’s really refreshing. It’s different for us.”

Both husband and wife expressed how fortunate they were to watch Shen Yun and the regret that it was over.

“We’ll recommend it, but it’s only one night!” Mrs. Reid said.