Shen Yun, a Fun Way to Learn About China 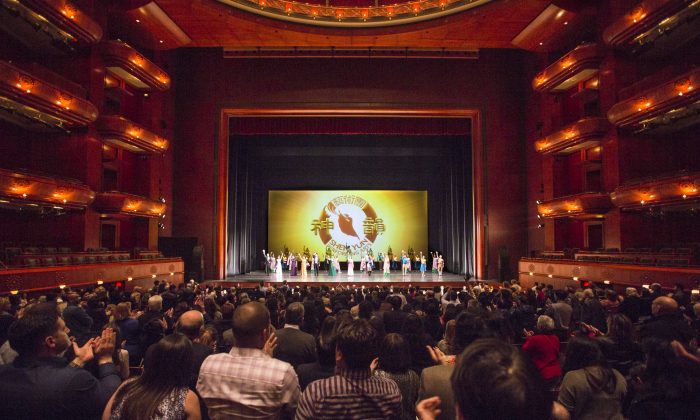 NEWARK, N.J.—A diverse, merry crowd gathered at the New Jersey Performing Arts Center on April 11 to watch a Shen Yun performance, and many left with the feeling that they learned something new.

Pat Comly, an adoption social worker, took her Chinese daughter to see the show. Ms. Comly’s daughter, who is 15, has spent most of her life in the U.S.

Ms. Comly felt Shen Yun was a good way for her daughter to learn about her culture.

Shen Yun is a classical Chinese dance group that uses the art of dance and music to celebrate Chinese literature, dynasties, and historical figures.

A Shen Yun performance also includes a few opera performances, where renowned singers perform in bel-canto style while singing Chinese lyrics that are based on Buddhist, Taoist and Confucian principles.

“The meaning of the songs [encompass] ancient culture that is thousands and thousands of years old,” Ms. Comly said. “It just moves the heart.”

“It’s great to see the culture kept alive and shown across the world, but unfortunately not in China,” Ms. Comly said.

Shen Yun cannot be seen in China today, where traditional culture has been nearly lost after the Cultural Revolution from 1966–1976. In 2006, a group of distinguished classical Chinese artists founded Shen Yun in New York to revive traditional Chinese culture.

Since then Shen Yun, a non-profit organization, has become an international phenomenon.

Leo McKenzie said he walked away from the show with a feeling that he had learned something about compassion.

“It made me feel relaxed,” Mr. McKenzie added. “The music for me was excellent … the orchestra was terrific.”

He said he especially liked the erhu solo performance. The erhu, also known as the “Chinese violin” uses two strings to convey a wealth of emotions.

The opening scene begins with the advent of the first dynasty. [Following the Creator to Renew all Things] “Then it went up through time, until the final scene … [The Divine Renaissance Begins],” Mr. Spacer said.

Some of the dances relate stories about the current situation in communist China—the repression of people of faith.