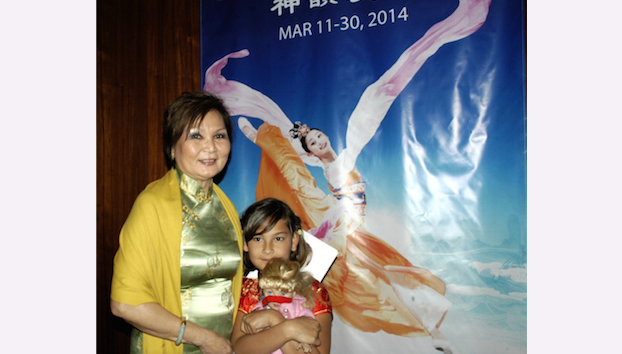 Ms Connie Chan Delphonzo and Abbie her granddaughter reconnecting with the roots of their Chinese Culture as they enjoy Shen Yun Performance at the Sergstrom in Costa Mesa. (Chang Man/Epoch Times)

COSTA MESA, Calif.—Shen Yun Performing Arts was a delight for the audience at the Segerstrom Center for the Arts, on March 16, and among the crowd was Connie Chan Delphonzo and her granddaughter Abbie. They were enjoying a reunion with their Chinese heritage.

“Now I have time to do anything I want. And one of the things was coming to watch Shen Yun,” she said. “My granddaughter saw it on TV and she kept bothering me ‘grandma, can we go see it?’”

Ms. Delphonzo’s father was from mainland China and left over 60 years ago. As a child she would watch operas, so she has always appreciated her native Chinese culture.

While different than the style seen in Beijing operas, she had an appreciation for the distinct bel canto opera performances in Shen Yun. “Shen Yun vocalists’ singing technique is the genuine bel canto tenor and soprano technique, and is very similar to the technique used by the ‘10 great tenors’ of the past,” according to the Shen Yun website.

As for the other elements of the show, she said that Shen Yun was “Beautiful. It’s just breathtaking and I just love the blends of the colors and the music, it’s just marvelous. I really enjoyed it a lot. The evolution and the beauty of the dancing was just marvelous.”

Although it was their first time at Shen Yun, her granddaughter Abbie also enjoyed the show immensely. She said, “I really liked when the dancers did the splits in the air and I really like the type of dresses they wear because it has so much detail involved.”

According to the Shen Yun website, “All these jumping, turning, and flipping techniques, along with the exquisiteness of the bearing and form, give classical Chinese dance special expressivity. It is able to transcend ethnic, cultural, and even linguistic barriers, taking this well-established Chinese culture and presenting its essence to the world.”