'A feast of perfection and beauty personified' 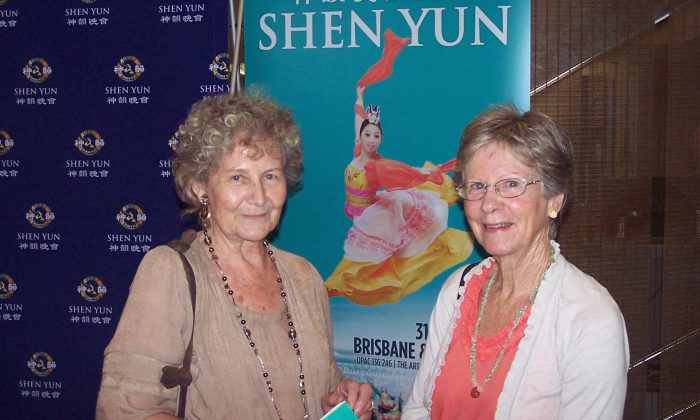 BRISBANE, Australia—”It’s a divine expression,” said Shirley Langevad when she experienced the wonder of Shen Yun Performing Arts at the Concert Hall, QPAC, on Feb. 4.

Ms. Langevad is now retired but says she has been an artist all her life, as well as an archeologist.

She said she did not even know she was going to Shen Yun until a few days ago when her friend said “I’ve got two tickets and I’m taking you.” She is so grateful.

As an artist, Ms. Langevad could not believe the scenes unfolding before her eyes.

“I just think it’s beautiful. From an artist’s point of view I’m just bathed in it; I really am just so overwhelmed by this. I’ve never seen anything so beautiful.”

Based in New York, Shen Yun is the world’s premier classical Chinese dance and music company. Shen Yun’s productions feature classical Chinese dance, an ancient art form, as well as ethnic and folk dances from different parts of China, and a live orchestra that accompanies the dances with original compositions.

The company also uses state of the art digital technology to project breathtaking landscapes and heavenly realms—a backdrop for the dancers who at times seamlessly seem to enter and appear from. A feature that captures the delight of many, Ms. Langevad amongst them.

“The backdrop … It’s so beautiful. You know when the dragon queen went to the back of the stage and then the figure would emerge at precisely that point and at that time,” she said, admiring the timing and precision of the scenes on the backdrop.

“I’ve also painted backdrops for theater, I’ve done the paintings for the backdrops for the stage presentation, but to see it done this way with all the modern technology, I’m just blown away, just so beautiful.”

The quality and beauty of the costumes and the dancers also enraptured Ms. Langevad. She said she loved all aspects of the performance.

“Everyone who came out to perform was inquisitively beautiful. The men, they’re exquisitely beautiful, handsome, and I loved the way they carried themselves,” she said.

“There’s no need for words, you know, it’s all told behind the word, the unspoken word … beautiful. I can go on and on and on,” she said. “When I go home I will certainly sit and reflect quietly at this. It’s been such a feast, it’s almost been overwhelmingly beautiful.”

Ms. Langevad said she loved the spiritual aspect the most.

I found it nourishing and uplifting.
— Shirley Langevad
“[Shen Yun] filled every part of my aspect of my being. I loved that expression, I loved the spiritual, the essence of the spirit, the spirit throughout it. Because we tend to do things today, and people pass that by, and I find it in my own quiet way—to come to the theatre and have it expressed openly in such a way—I found it nourishing and uplifting,” she said.

Shen Yun’s website explains, “Sophisticated dance techniques, an orchestra joining instruments from both the East and West, beautiful costumes, and a stunning back drop—this is Shen Yun at first glance. But digging deeper, one discovers a sea of traditional Chinese culture. Mortals and divine beings merge on stage as one. Principles such as benevolence and justice, propriety and wisdom, respect for the heavens, and divine retribution, all come to life, washing over the audience. Originating from Confucianism, Buddhism, and Taoism, these ideals are the essence of traditional Chinese culture.”

Reflecting on the the spiritual aspects of the performance, Ms. Langevad said Shen Yun uses the arts to present a divine performance.

Lucia Hassett and her daughter flew from Carins, 1700 kilometres north of Brisbane, to experience the wonder of Shen Yun, Ms. Hassett’s first time.

“It was majestic! It was epic! It was really, really special! It touched my heart,” she said.

“I think it was the grace and it was just that energy. The showmanship was beautiful.”

She appreciated the story based mini dramas performed with classical Chinese dance, and was moved by one depicting the persecution of Falun Dafa, a peaceful meditation practice, practiced all over the world but banned in China.

“It’s that journey that takes you through tradition and plight and what’s been happening. All those things are just capturing and just getting involved in someone else’s culture, life, and understanding,” she said.

“Very spiritual. It was dramatic but it also had this grace and gentleness.”

Ms. Hassett works with a lot of children who have suffered trauma. She said she wished she could take them to see Shen Yun.

Valerie Carter came to Shen Yun with her mother and sisters, she said this was the first time they have all been out together like this as they are all very busy. She has seen many different dance performances as her daughter and nieces do dancing, but she has never seen anything Shen Yun before, she said.

“I’m just blown away with how they float around on the floor and the height that the young man can get,” she said. “The girls are so in sync and the colours are just amazing. It’s magical. I Like the big screen. I’ve got goosebumps talking to you right now.”

“The big screen behind and the interactions of them jumping out of the screen so to speak, it’s incredible.”

‘Erhu talked to me’

“Excellent, I loved it a lot.’

He particularly loved the solo performance of the two-stringed erhu accompanied by the piano. The erhu has a history over 4000 years and is one of the most important Chinese instruments. It is often called the Chinese violin.

“The two stringed violin, it was absolutely magnificent,” he said. “It was lovely. It made me feel like it was talking to me.”

He added, “It was magnificent, I wish I could go again.”

Bernadette Curley, a business owner, brought her grandsons to experience Shen Yun and introduce them to the culture of another country.

She was pleased to see that Shen Yun included a mini drama dance piece depicting the persecution of Falun Dafa.

“I think that is terribly, terribly important to bring that to the view of people because it is not an aggressive meditation, it is one that puts people at peace, it is very, very old,” she said.

“I think that the [Chinese] government should embrace it [Falun Dafa] rather than suppress it.”

There were many aspects Ms. Curley loved.

“The music was superb, the orchestra was absolutely fantastic. The costumes of the performers is absolutely perfect,” she said.

‘It brings tears to my eyes’

“Fantastic, I enjoyed it,” said Edna Brown when she saw Shen Yun for the first time.

There were so many aspects she loved.

“The dancing, they moved very elegantly. The colours, I love colours, they’re beautiful.I love the background, it’s amazing how they go in and come out, it’s fantastic. Done very well.”

Shen Yun has classical Chinese dance at its heart but also incorporates folk and ethnic dance as well as mini dramas depicting legends and tales across 5000 years.

According to the Shen Yun website, “China was once known as Shen Zhou—The Divine Land. This profound name describes a land where deities and mortals coexisted, and a belief that the divine transmitted a rich culture to the people of the earth.”

She said she would encourage her daughter in Sydney, a dancer, to go and see Shen Yun in Sydney.